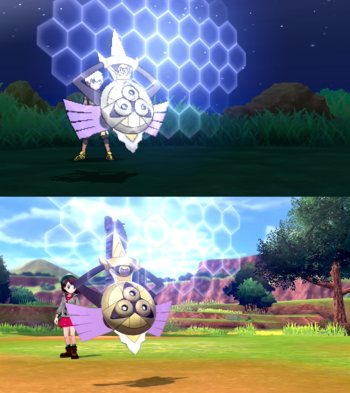 Top: Pokémon Ultra Sun and Ultra Moon
Bottom: Pokémon Sword and Shield
The act of reusing game assets in order to make a new work. Or, at the very least, a new installment in a franchise or series.
Advertisement:

It's a fact of life that making graphics is expensive and time consuming, and a lot of studios just don't have the budget to completely remodel entire landscapes, inventories, and characters for every work they make, especially if it's part of a larger series. If you aren't moving to a new system or game engine, sometimes it just makes sense to build the new world as an expansion of the old. Done well, this can help establish continuity between installments, and allow the developer to provide larger worlds to explore on a smaller budget.

While this is most easily noticeable in Video Games (especially Mission Pack Sequels), the rise of 3D modelling is beginning to cause other media to adopt it as 3D modelling becomes more ubiquitous — see Recycled Animation for such cases. For entire shots of film being recycled, see Stock Footage. Closely related to Prop Recycling (which is more specific in what is reused between games) See also Recycled Set. Compare Recycled Script.

A more malicious use of this trope (using unmodified store-bought assets in games with no artistic cohesion or narrative purpose) is known as Asset Flipping, with games that make heavy use of it called Asset Flips.