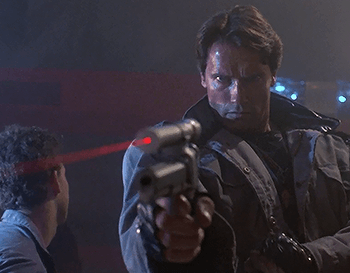 Also useful to entertain cats.note Or maybe not.

"I didn't know you were a Hindu!"
"I'm not."
"Then what's that on your forehead?"
BANG
Advertisement:

A little laser pointer mounted to a firearm. Allows a marksman to accurately point a weapon in the dark. Also tips off the target (and audience).

Much more common in fiction than in reality. The laser sight is a useful device in some situations, but it's expensive, can break, many holsters can't accommodate it, it needs batteries, it isn't bright enough to be visible in bright sunlight, and in dim light it reveals the shooter's position and intent immediately to everyone who may happen to be looking in that direction (unless it's an infrared laser and the shooter is wearing infrared goggles, but those are even more expensive and require more maintenance), etc. It does nonetheless decrease the time needed to aim reliably at a target — especially in the dark.

Law enforcement uses laser sights for its psychological value: Advertising that they are, in fact, pointing their gun directly at the person may encourage that person to give themselves up without a fight.

Totally ridiculous, however, is the inclusion of these contraptions on military weapons, especially sniper rifles, since for the shooter it does no more good than what his scope's crosshairs are already doing, and it merely serves to identify the target to the audience. Additionally, at long range the laser beam doesn't reflect factors such as gravity or wind that will throw the bullets off-target — the laser can be useful for estimating the distance to target, so the sniper can adjust his telescopic sight to compensate for gravity, but that's about it. And again, a visible laser sight also reveals the shooter's location and intent to the target, who can then use the opportunity to escape for cover since they know somebody is gunning for them. As this is the only effective means to escape from enemy snipers, every television sniper rifle is shown using one.

However, that same ostentation makes them very popular as a Weapon for Intimidation. Someone thinks they're safe? Just give the word, and your embedded team of marksmen will switch on the lights, and the target will look like he suddenly contracted chicken pox. Cue Oh, Crap! moment. Or, just point down at his chest, towards the little red dot that's been trained unswervingly on his left ventricle the whole time he's been talking. Yeah, you could just tell him your snipers have him in their sights, but (a) you could be lying and (b) it just doesn't have that visceral punch of seeing visible evidence of the fact.

The best (and most common) use for laser sights is in night combat, where the lasers are visible only through night-vision goggles. This is because night vision goggles are often too big and bulky to allow the shooter to use the iron sights, and a laser is required in order to hit anything. There are, however, night-vision compatible reflex and holographic sights. The laser is also useful for telling where other people on your side are aiming while using night-vision, allowing multiple shooters to aim at the same target and lay down bullets without anyone needing to give complicated instructions as to where to shoot.

Laser sights also allow the shooter to precisely shoot a weapon (most likely an assault rifle or a pistol) from the hip without relying on the iron sights or other optics. This is useful if the shooter needs to fire quickly, but it is limited to short range combat only.

In video games, a highly visible laser sight is one of a number of ways often used to cue players to the existence of snipers; similar to the classic version, Crosshair Aware, the player is able to see they're being targeted, and (for a third time) allows them to quickly identify the sniper's location (by simply tracing the laser to its source). While this is done to balance gameplay, it's not in itself a justification for the trope; that would imply there were some reason for the sniper to use a visible laser sight, and their presence or visibility is rarely explained in-game.

Oftentimes used as a *Click* Hello alternative for ranged weapons.