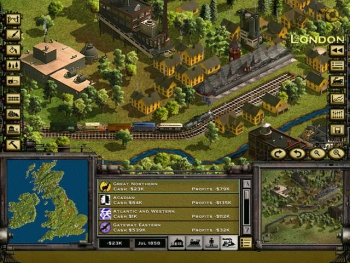 Railroad Tycoon is a series of games simulating the operation of railroads/railways. The original game was created by Sid Meier at MicroProse and released in 1990. Two sequels were created by other developers in 1998 and 2003 respectively, before Meier returned for a fourth installment, Sid Meier's Railroads, in 2006.

The original "Tycoon" game and the one that helped to popularize the Business Sim genre. Conceived as SimCity meets 1830, the game was very well received when it first appeared in 1990 since it captured some of the real life challenge and competition of running a large rail company. It was also a classic example of being better than it sounded, drawing in players who weren't the slightest bit interested in trains, the stock market or 19th-century history.