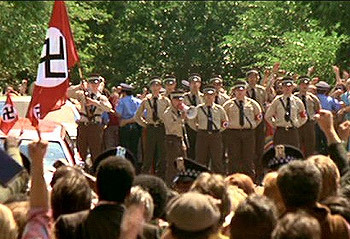 Those Wacky Nazis covers a variety of Nazi stereotypes.

Before we get on with the list, we suggest you take a look at Nazi Germany, Adolf Hitler, World War II, Ghostapo, The Holocaust, We Didn't Start the Führer and Stupid Jetpack Hitler. And, by way of contrast, All Germans Are Nazis and A Nazi by Any Other Name.

There were many branches of the Nazi military, each associated with the above subtropes to a varying degree. Most of the more evil, sinister Nazi archetypes tend to belong to the Schutzstaffel (SS), one of the Nazi party's paramilitaries (and the ones who ran the concentration camps). SS members are immediately recognizable by their ominous all-black uniforms (which were only dress uniforms; in the field, they wore standard fatigues, albeit with special insignia). More mundane Nazis may belong to the Wehrmacht, which was comprised of the Heer (Army), Luftwaffe (Air Force) and Kriegsmarine (Navy), where they are less likely to be members of the Nazi party at all and more likely to be conscripts.note  This isn't Truth in Television, despite what unsubstantiated (and deeply biased) post-war memoirs might lead one to believe by deliberately or accidentally misrepresenting the Wehrmacht's deep commitment to Nazism and depressing litany of War Crimes — which include the policy that no German soldier would be tried for War crimes committed against Soviet citizens because they were going to exterminate them all anyway (Hitler approved, but it was the Wehrmacht's idea). By 1939 the Wehrmacht was basically like any other branch of the government — highly politicised, and constantly competing for Hitler's attention and patronage. A big part of this change was because the people who made up the army itself had changed. The old core of Weimar-Republic officers accounted for less than a tenth of the newly-expanded army by 1939 and exponentially less thereafter as losses mounted - the rest had all been promoted and/or had grown up under the regime. But even the Weimar-era officers weren't exactly not-racist either, for Imperial Germany had been involved in such pleasantries as the genocide of the Herero people in German West Africa. Anyhow, the Wehrmacht's increasing politicisation came at the expense of its military professionalism, and by 1941 its operational plans had become seriously divorced from reality as they based more and more of their planning upon racist assumptions about their enemies. They never even attempted to redress this.

If Nazis are out hunting for La Résistance or Jews, you might encounter The Gestapo, the German Secret Police, though they tend to be less of a threat than their rivals in the SS (though they're usually no less horrible as people). Last but not least are members of the German spy service, the Abwehr, who are the most likely to secretly be working with the Allies. Admiral Wilhelm Canaris, the head of the Abwehr, loathed the Nazis and put much of the Abwehr's energy into feeding them false information, smuggling Jews out from under their noses, and unsuccessfully trying to kill Adolf Hitler. He was part of the July 20th Plot, and was shot for his role in it.

Then there are neo-Nazis. Generally today they tend to be somewhat stereotypical and lower-class skinhead punks, covered with tattoos and listening to rage rock, with no real agenda besides anger and violence, and generally representing a particularly nasty strain of disaffected youth, often led on by calculating hatemongers with more cynical motives. These are common in cop shows, and are given a particularly chilling representation in the film American History X. Other films, like The 51st State, portray them as asinine thugs, dumber than a box of rocks. It's also important to note that not all skinheads are Neo-Nazis, and making such an association around a traditional or anti-racist skin tends to invite a reaction. Other skinheads tend to be strongly anti-Nazi, even far left. The skinhead movement originated as a style of dress and haircut common among working class men: workboots, jeans, and no hair because you work with machinery. The neo-nazi movement appropriated those fashions in the same way that the Nazi party apporpriated socialist language, symbols, and colors before the war.

On the other hand, during the earlier days of the Cold War, spy shows, such as Mission: Impossible or The Man from U.N.C.L.E., occasionally had their protagonists take a break from battling the commies in order to put a stop to someone's attempt to establish "The Fourth Reich". These Nazi wannabes would invariably be vaguely Germanic, paranoid, arrogant, obsessed with "discipline," and usually very morally rigid (such as announcing that in the New Order, women would be limited to making babies, their "proper function"). In short, such characters were little more than broadly drawn cartoons, although they do have some factual basis (e.g. Nazi commando Otto Skorzeny's post-War activities). Given that the entertainment industry is predominantly Jewish, and World War II was still a recent memory for most people, it's not surprising that any Nazi character would be denied even the tiniest human characteristic. Another with some (increasingly small) currency today is the fugitive Nazi war criminal, who may well be hiding out in Latin Land (especially Argentina, it seems) or even the continental United States. Perhaps he's working as a dentist...

The sheer use of them as antagonists practically makes them an arguable standout example of The Usual Adversaries, and perhaps the ultimate form of Villain by Default. Nazis are also one of the most well-known examples of Politically Incorrect Villains. If people from the Nazi period are cast as protagonists instead, see Nazi Protagonist. These may or may not be Villain Protagonists as well.

Luckily for English audiences, a lot of the more functional parts of speech are extremely similar-sounding in English and German, so the lines are often blurred between Poirot Speak and Just a Stupid Accent. Along with the list above, you can include "ja", "nein", "mein(e)" (my), "ein(e)" (one/a), "wo/was" (where/what), "das", "ist", "gut", and many others. Das ist gut, ja?

Any low-ranking Nazi Mook will have a limited vocabulary, consisting solely of these phrases uttered in rapid succession, also called "voice achtung". In real life, the Wehrmacht did not print phrase books to its troops, essentially because most Germans already know a little English and French, and on the Eastern Front, the only words a German soldier needed to know was "Ruki Vverkh!" ("hands up!") and "Mleko, Kurki, Yaiki" (Milk, Chicken, Eggs) — for extorting said produce from the locals.

Despite their name, Grammar Nazis don't usually count (with the odd exception...

). And of course, comparing someone unfairly to Nazis invokes Godwin's Law.

See also The Klan, another group of people infamous for their racism, and Evil Colonialist, for the similar types of villains with similar mentality. When they are ridiculed or Played for Laughs, you have Adolf Hitlarious. When they are Nazi-esque organisations but not Nazis themselves, you have A Nazi by Any Other Name. When the Nazis merge with communist belief, you have Commie Nazis.

In post-WWII works, the Neo-Nazis will also overlap with Evil Reactionary trope due to their old traditionalist beliefs.

Klaus is a nazi since back when the Nazi Party still lived and he acts like it still does.

Klaus is a nazi since back when the Nazi Party still lived and he acts like it still does.