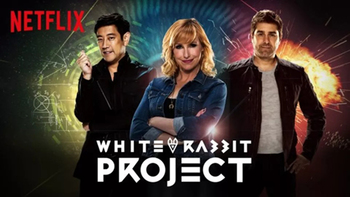 How deep does the rabbit hole go?
Advertisement:

White Rabbit Project is a series commissioned by and is exclusive to Netflix, starring the Build Team from MythBusters - fan favorites Tory Belleci, Kari Byron and Grant Imahara. In it, the team will take six legends and theories related to the topic of the episode and pick three criteria to be used to grade the epicness of the legend or theory. Aside from that, the show will also re-enact the events in the legends and dramatize theories using professional actors and stuntmen alongside Kari, Tory and Grant; and in many cases, Kari, Tory and Grant also get to do builds to test out theories as well as validate the legend. At the end of the episode, the team ranks the legends or theories based on the three criteria chosen.

The series premiered with ten episodes on December 9, 2016. It also spawned a live show which toured Australia. Sadly, however, Grant revealed that Netflix chose to not renew the show for a second season.

Tropes exhibited by the show include: