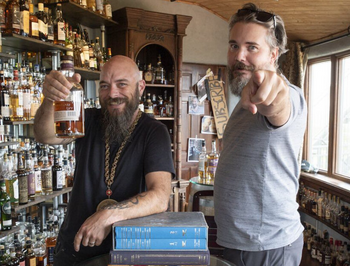 is an Edutainment video series on YouTube. Hosted by whiskey sommelier Daniel Whittington and video editor/whiskey mooch extraordinaire Rex Williams, the show features them sampling and reviewing whiskies of various types, many of which have been donated by viewers of the channel. Daniel is the co-founder and lead instructor at the Whiskey Marketing School at Wizard Academy in Austin, TX, which teaches whiskey sommeliery; the show sprang from his work. The first episode premiered in December 2016, and since then it has grown to become one of the most popular alcohol-based channels on YouTube, with almost 400K subscribers.

, which is much more loose in format and in which they do more interacting with their fanbase.

"Here's to fighting, stealing, and drinking! If you fight, may you fight for a friend. If you steal, may you steal your lover's heart. And if you drink, may you drink with us!"