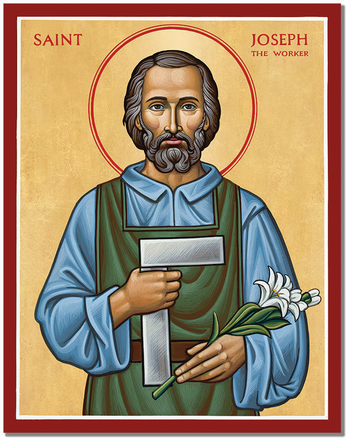 A guy like that has to be level-headed.
"Holy Hannah!" shouted Captain America in Secret Defenders #6. Who, you ask? Why, "Holy Hannah" is better known as St. Hannah of the Funnybooks, patron saint to Golden Age superheroes (As opposed to "Holy #%&* !", patron saint of '90s superheroes.)
— Marvel Year In Review 1993
Advertisement:

Some of us are believed to be closer to the divine than others. In Catholicism, Orthodoxy, and some forms of Protestantism, these special people are called "saints" and they can be called upon to intercede and/or create miracles on our behalf.

The process of being named a saint is canonization (or, in some branches of Orthodox Christianity, glorification), a long and complicated process. note Note that canonization does not make one a saint, as only God can do that. Canonization is merely the process by which the Church recognizes that a person has become a saint. Many saints may exist who have not been canonized. In fact, Orthodoxy defines a saint as anyone who was accepted by God into Heaven, but not all saints will be recognized by the living because not all saints will have miracles granted in their names by God. For more information, just look up the relevant keyword(s) on The Other Wiki.

Note that Catholics and Orthodox do not offer "worship" (latria) to the saints; what the saints receive is doulia or "honor" — or, in the case of the Queen of the Saints, the Blessed Virgin Mary, hyperdoulia or "extreme honor". One does not pray to the saints but rather asks them to pray for you. Roman Catholic theology calls this intercession: Being the Boss of Heaven, only God has the power to grant prayer requests, but one can ask a saint in heaven to lend his assistance in expediting the process. Apparently, Heaven still has a lot to work on fixing red tape within the Celestial Bureaucracy.

For some of the most commonly referenced Saints in fiction, see Patron Saints. Real-life examples should be put there.

In fiction, often treated as the monotheistic equivalent of Odd Job Gods.