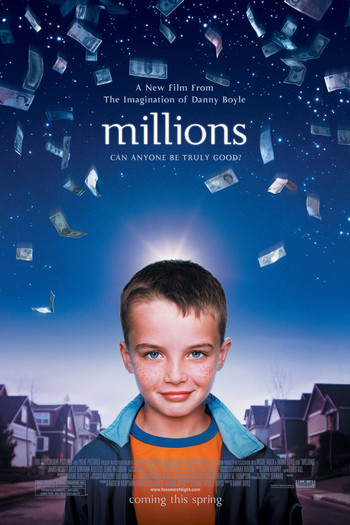 A 2004 comedy-drama film directed by Danny Boyle (Shallow Grave, Trainspotting, 28 Days Later). Children's author Frank Cottrell Boyce, who wrote the screenplay, also adapted it into a novel published prior to the film's release, which won the 2004 Carnegie Medal.

It's something of an understatement to say that Millions was a noticeable diversion in Boyle's career, as it's (ostensibly) a kids' movie with strong religious themes. The story concerns a young boy named Damian (Alex Etel), who recently lost his mother. He daydreams about the Saints in a cardboard castle. When a train robbery results in a falling bag of cash landing near him, Damian and his older brother Anthony (Lewis McGibbon) have to decide what to do with it. Anthony wants to spend it on luxuries for himself, while Damian wants to use it to help the poor. As the plot moves forward, the boys' widowed father (James Nesbitt) and the train robber (Christopher Fulford) looking for his missing loot get involved.

The film, despite a young cast and a bright aesthetic, deals with some fairly heavy issues; greed, religion, grief, altruism, morality and the cynicism of adulthood.