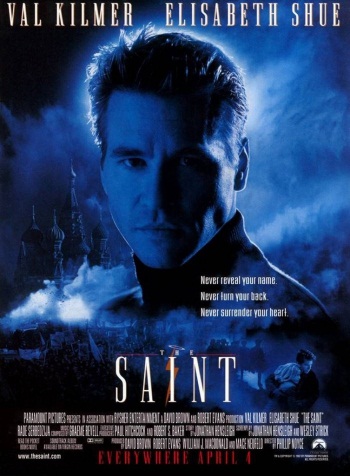 The Saint is a 1997 film based on the character of Simon Templar created by Leslie Charteris. The film stars Val Kilmer, Elisabeth Shue, and Rade Serbedzija. It was directed by Phillip Noyce and written by Jonathan Hensleigh and Wesley Strick.

In the movie, Templar is caught trying to steal a microchip from Ivan Tretiak, an ex-communist-turned-billionaire who dominates the gas and oil market in Moscow. Tretiak hires Templar to steal the formula for cold fusion from an American scientist named Dr. Emma Russell in exchange for the $8 million needed for him to reach $50 million, the amount Templar needs in order to retire from thievery for life. Assuming the identity of Thomas More, Templar locates Dr. Russell and attempts to get close enough to steal the formula, but things get very complicated shortly after he realizes he is falling for her...

In this version, Kilmer's character does not claim to be the Simon Templar created by Charteris. He is, in fact, an orphan who chooses his name, Simon Templar — the first name from Simon Magus, and the last name from his childhood heroes, the Knights Templar. He refers to himself as Templar only during a flashback sequence at the start of the film.

It should be noted that a) fans of the Saint loathe this movie and b) Leslie Charteris is never mentioned in the credits. Ironically, despite the noted dissonance between this film and the rest of the franchise, it was produced by the same producer who oversaw the 1960s Roger Moore TV series and 1978 Ian Ogilvy revival, and Moore himself provided a voiceover cameo. Even more ironic, for the novelisation of the movie, Burl Barer, a noted Simon Templar historian, was commissioned to write the book, and he took the opportunity to add elements of traditional Saint continuity to the book; around the same time, perhaps to absolve himself of the sin of being connected to this film, he wrote a "traditional" Saint novel, Capture the Saint, which was the first new Saint novel in 13 years.