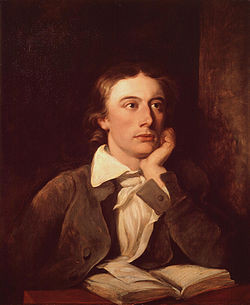 I could be martyred for my religion. Love is my religion — I could die for that.
— John Keats
Advertisement:

By the time you reach 25, odds are you will be out of college for a few years and in an entry-level job. By the time John Keats (31 October 1795 – 23 February 1821) was 25, he was one of the greatest poets in history — and dead. He never became particularly famous during his lifetime, but he would eventually have an immense influence on Romantic Era poetry.

Keats died of tuberculosis when he was only 25. Given what he accomplished in only that time, there is much speculation about what he could have done with a full career — for example, he was in progress on an epic poem, The Fall of Hyperion, which had the potential to become a classic on the level of Paradise Lost, but was left unfinished when he died. We'll never know.

He is most famous for his series of odes, which remain very popular today. They include "Ode on a Grecian Urn", "Ode to a Nightingale

", and "Ode on Melancholy". He also wrote many other poems, such as "Bright star, would I were steadfast as thou art", "La Belle Dame sans Merci" and "The Eve of St. Agnes".

Way over on the idealistic side of the Sliding Scale of Idealism Versus Cynicism. Big fan of Beauty Equals Goodness, very much not a fan of Measuring the Marigolds. Like other Romantics, Nature Lover featured a lot. Tropes applying to him in real life include Too Good for This Sinful Earth, and Vindicated by History. He and Lord Byron were the Sensitive Guy and Manly Man of the Romantic poets, respectively.

In 2009, a movie, Bright Star, was made about his relationship with his Muse/Girl Next Door, Fanny Brawne.

Oh, and if you notice that a Science Fiction fan knows anything at all about him, credit the Hyperion Cantos, which collectively constitute a primer on the life and desires of John Keats, and includes him (kinda) as a significant character.