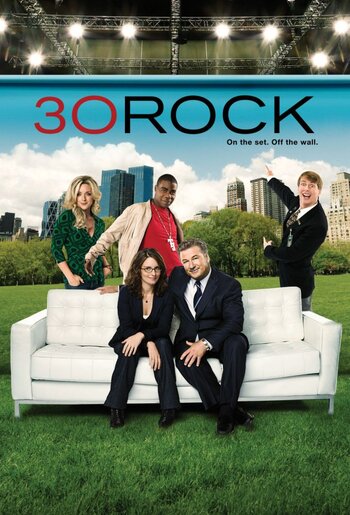 On the set. Off the wall.note From left to right: Jenna Maroney, Tracy Jordan, Liz Lemon, Jack Donaghy, Kenneth Parcell
"We were trying to make Home Improvement and we did it wrong. You know those scientists who were developing a blood-pressure medicine and they accidentally invented Viagra? We were trying to make Viagra and we ended up with blood-pressure medicine."
— Tina Fey on the creation of the show, from Bossypants
Advertisement:

30 Rock is a fast-paced and outlandish NBC Work Com starring Tina Fey (also a writer and executive producer as well as the creator of the series) and Alec Baldwin. The show was launched in 2006, and ended in January 2013 after seven seasons — not because of the suits, but because the showrunner wanted it to and Baldwin decided he wanted to do something else for a change.note Although, because this wouldn't be early-2010s NBC without at least one dickish executive decision, the seventh season is abbreviated—which neither Fey nor Baldwin wanted. Not bad, and a fitting run for a show that made out like a bandit at three consecutive Emmy Award ceremonies.

The series follows the life of the supposedly homely Liz Lemon (Tina Fey more-or-less playing herself), who is head writer of a fictional Show Within a Show based on Saturday Night Live. "30 Rock" refers to a nickname of 30 Rockefeller Plaza, the address of NBC's New York headquarters where SNL is filmed, which is where the series takes place.

A sizable portion of fanbase ships Jack/Liz, enough that the show has since sort of taken to simultaneously teasing/parodying the pairing. In any case, Tina Fey always said it would never happen.

Compare and contrast with Aaron Sorkin's Studio 60 on the Sunset Strip, which not only had a similar premise, but was greenlit by NBC at the same time as 30 Rock. Sorkin would later make a self-deprecating cameo in a later episode of 30 Rock.

Now has something of a Spiritual Successor in Unbreakable Kimmy Schmidt, which recognizably also comes from the same mind (but—we should note—is still quite different). Not to be confused with 3rd Rock from the Sun.

open/close all folders
A-H
I-N
O-Z
Shut it down!
Feedback

Example of:
Mistaken for Terrorist