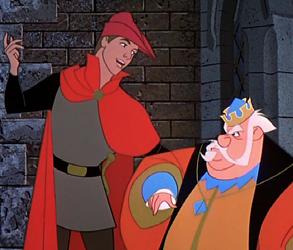 This is the Fourteenth Century?
The Middle Ages designates the time span roughly from the collapse of the Roman Empire to the Renaissance and Reformation. The adjective "medieval," coined from Latin medium (middle) and aevum (age), refers to whatever was made, written, or thought during the Middle Ages...Medieval authors, of course , did not think of themselves as living in the "middle"; they sometimes expressed the idea that the world was growing old and that theirs was a declining age, close to the end of time.
— The Norton Anthology of English Literature, Vol. 1, "Introduction: The Middle Ages"
Advertisement:

Era of the crusades, Robin Hood, and fat, lecherous (but good-hearted) friars. Also home to dragons, wizards, knights in shining armour, beautiful princesses with big headdresses, and tall, spirally gothic architecture. Expect to see a Corrupt Churchman or two wandering the landscape burning witches, heretics, and pretty much anyone who doesn't agree with them. Also expect to see people comically dropping left and right from the Black Death. ("Bring out your deeeeaaaaa——" *Fall* *Splut!*)

If the story does not take place in some unspecified kingdom, the setting is likely to be a mythologized Britain or France, though Jerusalem, which had pretty much been ignored since Bible Times will now also be used as the stage for all sorts of flashy battles involving cutlass-wielding Turks and ruggedly handsome Knights Templar.

The Middle Ages lasted for about a thousand years, and fell into five periods: the ugly Sub-Roman period (the fall of Rome, the barbarian invasions, the rise of Islam, and so on), the pleasant Carolingian Renaissance, the ugly Viking/Hungarian invasions, the pleasant High Middle Ages, and the ugly period of the Black Death and its aftermath. The classic medieval tropes above are exclusively drawn from the High Middle Ages: the period which stretches, approximately, from 1066 to 1348.

The Trope Codifier for the High Middle Ages was the 19th century, when the Middle Ages were celebrated as the embodiment of Romanticism in the Romanticism Versus Enlightenment debate. Ancient Greece, meanwhile, had been cast as the embodiment of Enlightenment in the 18th century. In reality, Ancient Greece and the High Middle Ages were very similar societies: both valued philosophy, science, and engineering, but feared and used magic and loved to fight. Both also had slaves, and a de facto caste system; both had a mix of slave/serf and free farmers as the basis of society. The Greeks valued city living more, though, and were a mix of petty kingdoms, democracies ("democracy" meant "mob rule" for a very long time thanks to their example), and lawless autocracies; but Persia was feudal (and most of medieval material culture — knights, castles, tunics, pointy shoes, roses, rhyming poetry, princesses in towers wearing conical hats with veils, wizards with robes covered in holy symbols — is originally Persian). It's fair to say that the High Middle Ages and classical Greece would've understood each other well, if they'd interacted — while contemporary Romantics and Enlightenment-ists would both have reasons to dislike both societies.

For a version of medieval tropes that casts a wider and more accurate net, check out the constituent periods:

(Although even here, the three initial periods of the Middle Ages are sort of a blur.)

Popular tropes associated with this time period are: