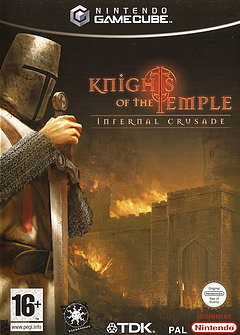 Knights of the Temple: Infernal Crusade is a 2004 European exclusive, made for PC, PlayStation 2, Useful Notes/Xbox, and GameCube. It is about Paul, young Templar Knight. He has been sent on a mission to uncover the evil conspiracy.
Advertisement:

An evil bishop has kidnapped Adelle, a mysterious young girl who has divine powers and he wants to use her to perform dark rituals in Holy places to desecrate them and gain access to the Gates of Hell. The game has a music by Within Temptation.

It's basically a bootleg Kingdom of Heaven with melee oriented action combat like others at the time.

It also received a sequel a year later, titled Knights of the Temple II. It was on the same platforms as the original besides Gamecube, due to the poor performance of the original there.