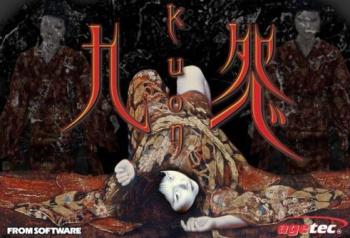 A 2004 Survival Horror game developed by FromSoftware and published by Agetec for the PlayStation 2, Kuon is based on ancient Japanese ghost stories. Set in Heian-era Kyoto, it tells the strange, dark and grisly tale of a cursed mansion and all the terrors that lurk within...

Much like Evergrace before it, Kuon has two parallel storylines ("phases" in this game), each with a different Player Character:

If you complete both the Yin and Yang stages, then you can unlock the Kuon phase, which follows where the Cliffhanger left off. For the final chapter, you play as the legendary exorcist and Doman's bitter rival Abe-no-Seimei, as she (yes, she) takes it upon herself to solve the crisis once and for all. Her weapon is a spear, and she has unlimited magical ability. Only by completing the Kuon phase can you attain the True Ending.

The antagonists that our two protagonists face are the Gaki, the mansion's former inhabitants (or what remains of them) who have been turned into bloodthirsty ghouls that are randomly encountered throughout the game. Other characters include the owner of the mansion Lord Fujiwara, his wife, their daughter Ayako, the high priest of the local shrine, and the mysterious unnamed twins who crop up every now and then, either to deliver cryptic information or just generally be creepy.

The plot is developed through a series of reports, documents and diary extracts, and can prove pretty complex. However the setting, while chilling and bloody, is also beautiful and the suspense created by the music and lighting (or sometimes lack thereof) gives the game a great sense of depth.