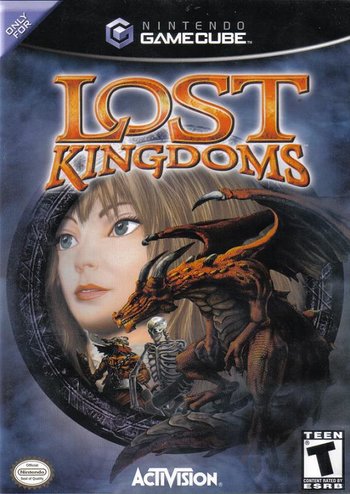 The Lost Kingdoms video game duo (also known as Rune in Japan) were the Nintendo Gamecube's answer to the Eastern RPG genre before Paper Mario graced it. They were created by FromSoftware and published by Activision outside of Japan (where they were published by From themselves).
Advertisement:

The first game was released in 2002, and focused on Princess Katia of Argywll, whose country is being invaded by a black Fog of Doom infamous for leaving nothing in its wake. Katia's father- the king of Argwll- has left the castle to try and stop the advance of the fog, but has not been seen since. When the castle itself is invaded by the black fog and the monsters that dwell within, Katia takes up a royal artifact called a Runestone, which lets her summon monsters that can fend off the horrors of the fog. She then embarks on her own journey to discover the source of the fog and find her missing father.

Lost Kingdoms II followed a year after the original in the real world, but 200 years have passed in-universe. This time, you play as Tara Grimface, a secluded woman that helps her adoptive father with his group of thieves, the Band of the Scorpion. All she really cherishes in the world is the Runestone she's had ever since she was a young girl and her father for raising her. As she tries to make it out in the world, they get a tip from someone that one of the nearby regions has been mass-producing Runestones, albeit weaker versions, and decide to drop by for a payday. From then on, Tara must save the world from one of the other gods that have been released on Argywll by one of the lesser kingdoms and their greedy king, Leod VIII. They also did what Final Fantasy XII would become known for in pretty much the same style; etching out random battles.

The games were a strange but effective combination of Card Battle Game and real-time combat. You build a deck of monster cards, and can then use these cards in battle to channel the powers of the creature within. Some would simply summon the monster into battle, but others gave you standard RPG effects like special attacks, healing or buffs. New cards could be acquired from treasure chests, upgrading existing cards, buying them off a mysterious merchant or by capturing weakened enemy monsters.

These two games provide examples of: