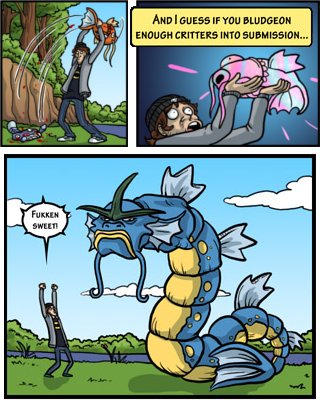 And then the Gyarados just eats him.note Just kidding. Mr. Fish is more docile than most dogs.
"I swear to god, when I evolve, I'm going to kill you all."
— Magikarp, via Memetic Mutation
Advertisement:

A character, ability, or piece of equipment that seems completely useless at first, but with repeated use and patience can be highly effective later. This can be an item/weapon you need to explicitly power up or even an entire low-level character who gets some really awesome techniques later.

The Trope Namer is Magikarp from Pokémon, a ubiquitous, dim-witted, carp-like Pokémon who only knows the move Splash, which, as the game gleefully informs you, "has no effect". It learns Tackle, the most basic attack in Pokémon, at level 15, and a lucky few have it as an innate skill, but its Attack stat is so low that it still does minimal damage. In short, it's pathetic... Until you painstakingly grind it up to level 20, at which point it evolves into Gyarados, a sea leviathan ready to wreak vengeance from on high with its own lethal abilities, and which can Mega Evolve further to steamroll just about anything that dares to pick a fight with it. Magikarp is based on an old Japanese legend

about a carp which manages to swim up a waterfall and becomes a dragon through sheer perseverance.

Leaked Experience can be very helpful in getting this to the appropriate point without weakening the party or putting the Magikarp Power in danger. Rare Candy may also be a great help. Related to Level Grinding in that the player is forced to drag an entirely useless item or NPC around for level after level, until it becomes useful.

A similar but distinct trope is the Retro Upgrade, where instead of upgrading the Magikarp itself, you earn or upgrade something else which makes the Magikarp much more powerful.

Compare Gathering Steam which likewise starts out pathetic but gains in capability throughout a fight, Elite Tweak, Future Badass, Took a Level in Badass (this trope implemented for a character), Linear Warriors, Quadratic Wizards (for when wizards are treated as magikarp), Lethal Joke Character (a Joke Character with hidden potential), Evolving Weapon, Evolving Attack, Equipment Upgrade, Difficult, but Awesome (for when a character/faction is set up to make the player a magikarp), and Changing Gameplay Priorities. Contrast Breakable Weapons, What Kind of Lame Power Is Heart, Anyway?, A Taste of Power, and Crutch Character. Can sometimes be heard to ask, "Who's Laughing Now?"