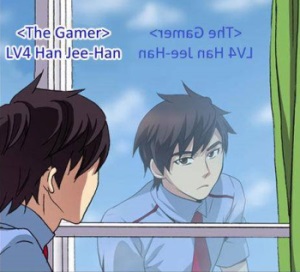 An adventurer is him!
"Is grinding my job now?"
— Han Jee-Han
Advertisement:

What would happen if your world suddenly turned into an RPG? What if you could level up, raise your stats, and embark on a lifetime of adventure, loot and genre tropes galore?

Enter Han Jee-Han, an 18-year-old Ordinary High-School Student. He's recently broken through The Masquerade and discovered that the world is full of dangerous monsters and people with supernatural gifts hiding in plain sight.

He is no mage, martial arts master, or monster summoner. His own power is meager in comparison, but it is unique: A lifetime commitment to gaming meant his gift manifested in him becoming a living RPG character. Whenever he looks at people, he can see their titles, level, and stats. He can tangibly and immediately raise his skills and overall stats by performing tasks and gaining experience. Monsters that everyone else considers a dangerous nuisance inexplicably drop equipment he can use. His injuries recuperate by consuming ordinary food or resting overnight. He is able to learn skills way above his apparent Power Levels by allocating his stats correctly. And he is prepared to take on this brave new world through grit, Genre Savvy, copious amounts of Level Grinding and the fact that none of his opponents can figure out how video game logic works.

A Naver LitRPG webcomic. English translations can be read on most major manga websites and on the recent official Naver translations

Not to Be Confused with The Gamers.