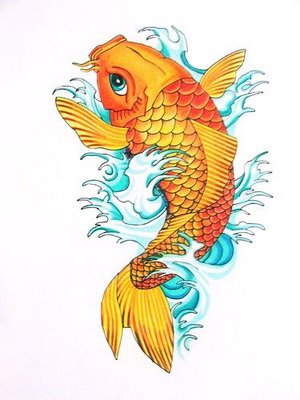 I swear to God, when I evolve...
"I think I made the fish too hardcore."
— Toady One the Great
Advertisement:

Carp have a strange tendency to appear unusually powerful in fiction, often being gigantic. Giant Carp are venerated for being colorful and allegedly wise pond dwellers, especially in Japan. Sort of like swimming parrots. They are known for their ability to jump many feet into the air and their long lifespan, something which is usually forgotten amongst their more domesticated, ill-kept brothers called goldfish. According to legend

, a sufficently old and powerful carp that is able to climb a waterfall may even become a dragon.

See Seahorses Are Dragons for another animal that turns into a dragon in Japanese Mythology.

Oddly, despite goldfish being a sort of carp, and supposedly being flushed down toilets on a regular basis, this myth rarely seems to cross over with the "giant alligator in the sewer" Urban Legend. Probably because the carp has barbels which make it look more like an Eastern dragon while goldfish doesn't...thus a goldfish won't turn into a dragon at all.

See also The Catfish, a more elusive kind of fish. If you searched for Legendary Crap, you either want Blatant Lies, Solid Gold Poop, Toilet Humor, So Bad, It's Good, or a page on the Darth Wiki that shall not be named.

Using the Avatar State, Aang merges with the Ocean Spirit into a gigantic creature of water and light to drive the invading Fire Nation fleet out of the North Pole.

Using the Avatar State, Aang merges with the Ocean Spirit into a gigantic creature of water and light to drive the invading Fire Nation fleet out of the North Pole.