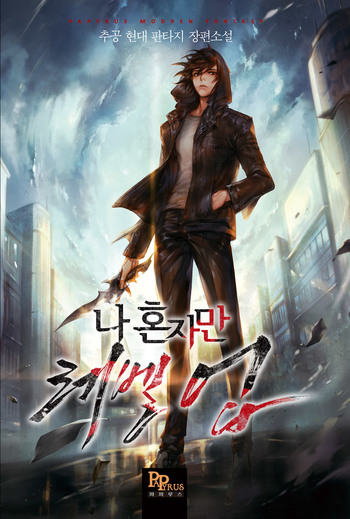 "I alone level up."
Advertisement:

Ten years have passed since gates appeared in the human world, which are connected to another world. At the same time, some people awakened superhuman abilities. The awakened beings who can enter the gates, and hunt the monsters that are lurking inside, before they can break out into the human world, are called "hunters". One of these hunters is Sung Jin-woo, a 24-year-old E-rank hunter, who is mockingly called the "World's Weakest Hunter". Being barely stronger than the average human, Jin-woo struggled in the lowliest of dungeons to get by and provide for his family.

One day, however, things go awry for Jin-woo and his party when a low-level dungeon turns out to be far more dangerous than initially assumed. Alone, wounded and surrounded, Jin-woo faces his certain doom, until a voice suddenly appears that offers to make Jin-woo a "player". Having nothing to lose, Jin-woo accepts and loses consciousness. After waking up in the hospital, he notices a quest log that only he can see, which uses RPG-like terms. Soon after, he learns that unlike any other hunter, he can gain character levels and improve rapidly by hunting monsters and training every day. This is the story of Jin-woo changing from the weakest to the strongest hunter in the world.

Solo Leveling (나 혼자만 레벨업, na honjaman lebel-eob, also known as I Alone Level Up) is a Web Serial Novel, written by Chugong, which consists of 270 chapters and was collected into 14 volumes by Papyrus.

Alternative Title(s): Only I Level Up