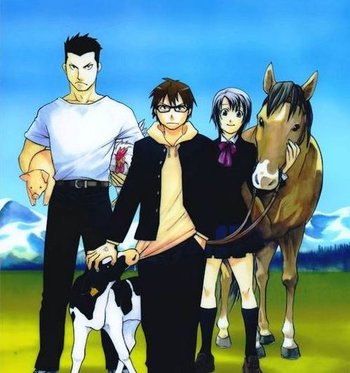 Yugo Hachiken is tired of people asking him about his dreams for the future. He may not know what he wants to be when he grows up, but he has the perfect plan to get ahead in school. Some kids break their backs trying to rise to the top of a tough institution, but Hachiken decides to enroll at a rural vocational and agricultural high school instead.

At Hachiken's new school, the textbooks on real subjects like math and English are all magazine-thin, and his classmates are countrified rubes, most of them the kids of farmers themselves. Sure, the textbooks on animal husbandry and produce are doorstops, but that's just memorization, right? If everything goes according to plan, Hachiken will rocket effortlessly to the top of his class...

There's just one teensy little problem; it hasn't dawned on Hachiken yet that, at an agricultural school, the main focus will be on agriculture... and he was raised in Sapporo and knows little to nothing about farming.

Silver Spoon (銀の匙, Gin no Saji) is a manga by Hiromu Arakawa of Fullmetal Alchemist fame, which ran in Weekly Shonen Sunday from 2011 to 2019. It draws heavily on the author's childhood on a dairy farm in Hokkaido, and puts a new spin on the high school drama formula. (Just try to name another school-days manga in which the hero gets roped into helping chop off a chicken's head within the first chapter).

An anime adaptation by A-1 Pictures aired in Summer 2013, and a second season followed in Winter 2014. A live-action film also came out in 2014.

Both seasons are available for streaming on Crunchyroll, and can be viewed here

For another manga based on agricultural schooling, try Moyashimon. Or if light novels are more to your liking, there's No-Rin.