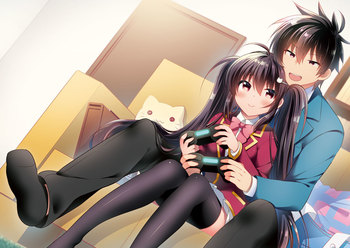 Even in high school, Ritsu and Uta really get along. Suddenly, they have to pretend to be lovers...!? The real brother-sister exciting love comedy starts!! note From left: Uta Fukami, Ritsu Fukami

Siscon Ani to Brocon Imouto ga Shoujiki ni Nattara (known in English as When a Sister Complex Brother and a Brother Complex Sister Become Honest is a Slice of Life and Romantic Comedy manga by Haruka Hano about two siblings who have to fake a relationship in order to avoid unwanted attention and embarrassment from their peers. First published on November 27, 2017, it has since gone on for 48 chapters and 3 volumes before ending its run in late 2019. There's also extra chapters as Drama CDs.

The story centers around two siblings, Ritsu and Uta Fukami, who are both close to one another due to sharing several common interests, including but not limited to video games. One day, however, Ritsu's friends coerce him into joining them on an outing with the girls from another class in his school. In the process, he meets and befriends a clingy Gyaru Girl slash Gamer Chick named Ami Hojou over a Mobile Phone Game match. Attending this outing causes him to inadvertently break his promise to Uta earlier, wherein he promised to finish playing a game with her that night. Not wanting to break his promise to Uta a second time along with a combination of peer pressure from his friends and Ami's clinginess, Ritsu lies about having a girlfriend to them, and accidentally shows them a picture of Uta. Not long afterward, he leaves them and meets up with his sister. In his haste, he asks Uta to pretend to be in a relationship with him, to which she agrees in exchange for him treating her to sweets. Hilarity Ensues as they struggle to pose as boyfriend and girlfriend in front of their friends, slowly fall in love for real with one another, and maintain their eventual Secret Relationship a secret from their own parents...