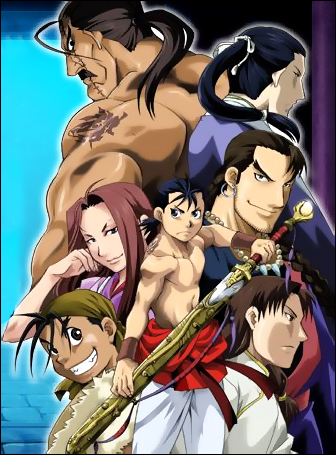 It is the time of wars.
Advertisement:

In the chaotic Empire, a group of seven heroes of the stars, the Hokushin-Tenkun, rose to lead the common folk. Out of the seven a destiny of heated battle unfolds between the "Two Noble Spirits", Hagun and Tonrou. Originally the two should not exist in the same time but the gears of Fate have turned otherwise.

In the current feeble state of the Ken Empire, the conflicting "Two Noble Spirits" - Taitou Shirei of Hagun and Keirou of Tonrou each fight for their view of justice and the peace of the countries and their home country.

In the name of Fate, the justice of whom shall prevail...?

It's illustrated by the author of Fullmetal Alchemist, Hiromu Arakawa. and written by Huang Jin Zhou - pseudonym of a group including Arakawa and studios Genco and Flag.

An animated adaptation aired in 2007 for 26 episodes while the manga concluded in 2010.