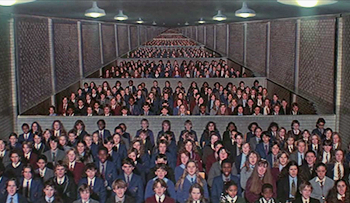 The laddie reckons himself a poet!
"I can see you in the morning when you go to school
Don't forget your books, you know you've got to learn the golden rule
Teacher tells you stop your play and get on with your work
and be like Johnny — too good, don't you know he never shirks
He's coming along."
— Supertramp, "School"
Advertisement:

Assimilation Academy generally requires school uniforms, acting shorthand for students' lost individuality. Expect it to be run by a controlling Dean Bitterman along with a Sadist Teacher or two. It will be ruled by an iron fist and forbids any student to question authority.

Related to Sucky School, School Is for Losers, and Boarding School of Horrors.