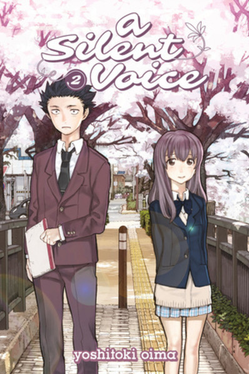 How far will you go to make up for the mistakes of youth?
Advertisement:

Shoko Nishimiya, an elementary school-girl with impaired hearing, transfers into a class of hearing students. Although she tries to reach out to her classmates, her disability makes her an easy target for bullying. Eventually, the physical and emotional abuse escalates to the point where she is forced to leave.

A Silent Voice (or Koe no Katachi in Japanese; literally "The Shape of Voice") initially started out life as a one-shot in 2008. It was later redone in the February 2011 edition of Bessatsu Shōnen Magazine. While it won the 80th Weekly Shōnen Magazine Newbie Best Mangaka Award, its subject matter made it difficult for publication on any manga magazine until it was picked up after months of legal dispute by the August 2013 edition of Weekly Shōnen Magazine, where it was serialized until November 2014. It's also sponsored by the Japanese Federation of the Deaf.

An anime film adaptation produced by Kyoto Animation was released to Japanese theaters on September 17, 2016. The movie was directed by Naoko Yamada and written by Reiko Yoshida, with Futoshi Nishiya serving as character designer. NYAV Post produced the English dub.