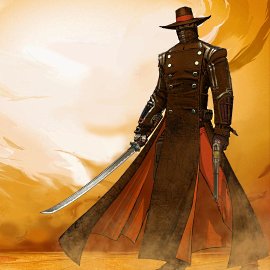 Konnichiwa, pardner.
But every day there's a new thing comin'
The ways of an Oriental view
The sheriff and his buddies with their samurai swords
You can even hear the music at night
— The Doobie Brothers, "China Grove"
Advertisement:

Essentially a melding of The Wild West and Feudal Japan, even if the setting also takes place in the future or has Cattle Punk elements.

The earliest association between samurai and gunslinger tropes was probably Akira Kurosawa, who modeled several of his samurai films after American Westerns. Fittingly, several of his films were remade as actual Westerns (e.g. Yojimbo into A Fistful of Dollars, and Seven Samurai into The Magnificent Seven). This helped tie in the close association between these eras.

Also, Rōnin and The Gunslinger seem to occupy the same place in the stories of their respective cultures. Both are essentially an updated version of the Knight Errant (or rather, Ronin serve as a bridge of sorts between the Knight Errant and the Gunslinger, having at various points been the contemporaries of both), drifters with Mysterious Pasts Walking the Earth, dueling rivals, fighting bandits, embodying stoicism and self-reliance, and aspiring to self-discipline, often while struggling with their inner demons.

The similarities between the idealized forms of the Bushido code and the Code of the West are undeniable, as well — placing honor and duty above all, protecting the weak, killing only when required but unflinchingly doing so when it is, valuing equally intelligence, Heroic Resolve, and physical ability. This makes it only natural that the two characters should begin to blend together in an East-meets-West world. The fact that they're both iconic warrior-types of their respective nations is also a plus.

Note that a cowboy moving to old Japan, or a samurai or kung fu master moving to the Old West, does not count. Such situations often lead to this trope, which is about explicitly blending the two — but not always.