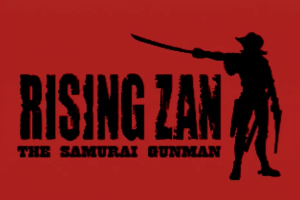 Rising Zan: The Samurai Gunman is an action-adventure Western game developed by UEP Systems and published by Agetec for the PlayStation in 1999.

If you didn't already judge by the title, it's about a Samurai Cowboy who tames the Wild West with both samurai and gunslinger skills. The game tells the story of a young man named Johnny who dreams of becoming the greatest hero who ever lived, but after an accident while exploring a gorge, he finds himself in the presence of a Japanese martial arts master (and old friend of Johnny's late father) named Suzuki, who teaches Johnny the ways of the samurai. After years of training in Japan, and mastering both the skills of a samurai and a gunman, Johnny returns home under his new name Zan and must confront a new set of enemies that threaten his hometown.

An interesting addition to the original PlayStation's line up, Rising Zan was fairly well received in its original release for is tongue-in-check premise, its many throw-backs to classic westerns and its undeniably catchy theme tune, though much criticism was given towards the game's lackluster controls. The game is also relatively obscure, often to the surprise of many critics who felt the game would have made a very worthy franchise if it were to continue on. The game nonetheless has gained a pretty decent cult following.