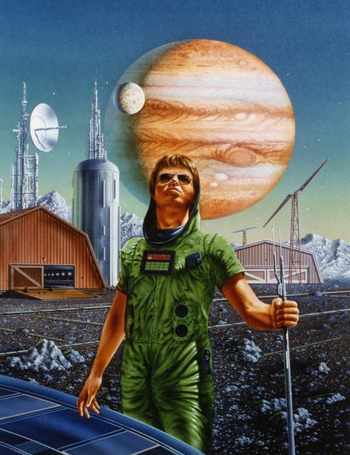 There's plenty of space in that place called space.
"(It is) ..our manifest destiny to over spread and to possess the whole of the continent which Providence has given us for the development of the great experiment of liberty"
— John O'Sullivan, The Morning Post, 1845
Advertisement:

Once the Bold Explorers have finished their job and found some exotic new lands or strange new worlds, it's time to take advantage and start a colony or settlement!

There are many reasons why people might choose to leave everything they know behind and set off to carve a new life out of an untamed wilderness. They might be seeking freedom, opportunity, or wealth. They might be fleeing an intolerable situation: discrimination, overcrowding, debt, poverty, bad governments, crime, ruined reputation, family conflict, or maybe the fallout of a terrible divorce; none of that matters in the frontier, in the frontier it doesn't matter who you are, where you come from or what happened to you, all that matters is what you can do and how can you contribute. On the other hand, it might be the case that the settlers simply had no choice in the matter — far off lands are such a convenient place to store your criminals, dissidents, and other unwanted population.

The dangers in settling new territory are great: hostile terrain, hostile wildlife, hostile natives, bad weather, lack of readily accessible resources, and much more. You may end up cut off from your homeland completely. Success is never guaranteed, and many settlements will fail, often with great loss of life. Nevertheless, the biological urge to expand and grow is strong, and new colonies will rarely lack for volunteers (or "volunteers"). Successful colonies can even end up matching or exceeding their homeland in power or resources, leading to plenty of opportunities for conflict.

And what about those natives, or small green creatures, who live where you've planned to plant new roots? I guess they'll just have to take their chances. Of course, if you are one of the natives (or small green creatures), living where someone has decided to settle, you may not be very pleased with the notion. If you can't talk them out of the idea, then it's possible that This Means War!

This trope tends to be a big part of American and Australian self-identity and mythos, though it is, of course, not limited to America or Australia.

See also: Cult Colony, Lost Colony, Penal Colony, Injun Country, Colonized Solar System. Related to The Migration. May serve as a mere setting for a work, or be an active element of the plot. Works in this setting often involve The Pioneer or the Determined Homesteader.