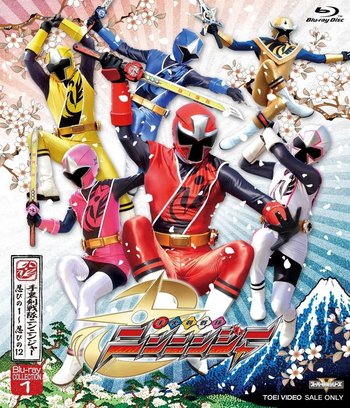 Nanja nanja nanja nanja!?
"To earn the title of 'Last Ninja', his five grandchildren carry on his will. Their enemy: the strongest Sengoku general, Kibaoni Gengetsu. The current young ninjas are the Shinobi that don't hide!"
-Opening Narration
Advertisement:

Shuriken Sentai Ninninger (roughly translates as "Throwing Stars Squadron Ninningernote nin in this case is short for Ninja") is the 39th series in the Super Sentai franchise, which aired from 2015-2016. It is the third Super Sentai team to have a Ninja theme (after Ninja Sentai Kakuranger from 1994 and Ninpuu Sentai Hurricaneger from 2002).

Long ago, the great Last Ninja, Yoshitaka Igasaki, managed to seal away the evil Youkai race, seemingly forever. But when in modern day he passes away, his enemies had succeeded in returning to our realm, ready to spread havoc and destruction. Now it's all up to the Last Ninja's five grandchildren, who must come together as a team to defeat the Youkai threat. These young practitioners of ninjutsu arts are still inexperienced and childish, but through training and hardships they will strengthen their bond and become the ultimate ninja team - The Ninningers!

Aired alongside the Kamen Rider series Kamen Rider Drive and then Kamen Rider Ghost, the former of which sharing a one hour crossover followed by the team making a cameo in the spring Rider movie, in the Super Hero Time block.

On January 12, 2016, it was revealed that Saban Brands would adapt their series as the 2017 and 2018 installments of Power Rangers as Power Rangers Ninja Steel.

Takaharu is granted access to the Chouzetsu Shoubu Changer, which allows him to become AkaNinger Chouzetsu, greatly increasing his speed, power and defence.

Takaharu is granted access to the Chouzetsu Shoubu Changer, which allows him to become AkaNinger Chouzetsu, greatly increasing his speed, power and defence.