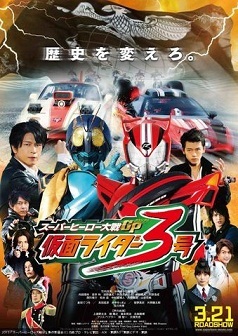 History has been changed.
Advertisement:

Shocker's new Rider, Kamen Rider #3, is sent back in time to 1973 to kill off the Double Riders, creating an Alternate Timeline where Shocker rules the world and has brainwashed nearly every Kamen Rider into their elite agents. It comes down to the few Riders who have evaded Shocker's grasp to form La Résistance and restore the correct timeline.

Takes place in-between two pieces of tie-in media. It follows the prequel TV special Shuriken Sentai Ninninger vs. Kamen Rider Drive, which aired in place of Super Hero Time a week following the premiere and sets up the events of the movie. It is then followed by D-Video Special: Kamen Rider 4, consisting of three special episodes tying up the loose end of the movie, the death of Kamen Rider Mach.