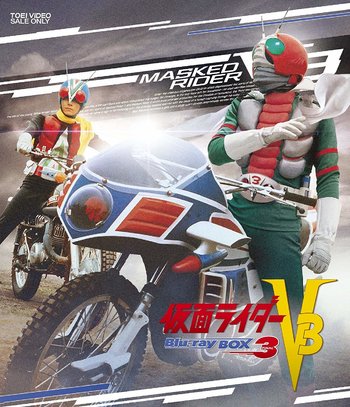 Kamen Rider V3 is the second installment in the Kamen Rider series, aired from 1973 to 1974. It is also served as the sequel to the original series.

Shiro Kazami was marked for death by the evil group Destron after witnessing a murder by their hands. When Destron forces him to watch the murder of his family, Kazami pleads with his saviors, the Kamen Riders to make him into a cyborg-warrior too. They only comply after he is wounded saving their lives; now, after the sacrifice of his saviors, Kazami as Kamen Rider V3 takes on the forces of Destron. Later, he is joined by former Destron scientist Joji Yuki, who takes up the mantle of Riderman, also known as the fourth Kamen Rider.

Voted #3 series in the Showa era, and #25 product overall in NHK’s All Kamen Rider Popularity Ranking.