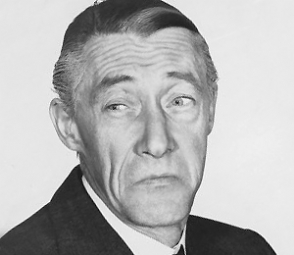 "I've made some of the greatest films ever made—and a lot of crap, too."
— John Carradine, summing up his own body of work rather nicely
Advertisement:

John Carradine (born Richmond Reed Carradine; February 5, 1906 – November 27, 1988) was a very prolific and frequently hammy actor who is probably best remembered for appearing in many, many B- to Z-grade horror films of the type later featured on Mystery Science Theater 3000 and The Cinema Snob, usually in the role of a Mad Scientist or Dracula.

For the record, that quote above is accurate: he did have some actual good roles. Carradine was a favorite of John Ford and appeared in several all-time classic Ford films, including The Grapes of Wrath, Stagecoach, The Man Who Shot Liberty Valance, and Drums Along the Mohawk. Other major films that Carradine appeared in include Man Hunt, Captains Courageous, and The Ten Commandments. He had a decent stage acting career, being a protégé of John Barrymore and playing roles such as the lead in Hamlet, and he's also remembered as the father of David Carradine, Robert Carradine, and Keith Carradine.

Still, best known for all those B-movies. Easily one of the most prolific actors who ever lived (if not THE most). His entire filmography (as listed by IMDB) comes to 340 titles, dwarfing even the 275 titles of fellow Dracula actor Christopher Lee (incidentally, Lee and Carradine actually share one credit: House of the Long Shadows, a 1983 Cannon horror comedy in which they appeared alongside Vincent Price, Peter Cushing and Desi Arnaz, Jr).

Often cited as a poster child for Money, Dear Boy, Carradine's willingness to take any role actually stems from an abortive passion project. In the '30s and '40s he managed a Shakespearean repertory company, John Carradine and His Shakespeare Players, which performed in San Francisco. Carradine's performances were highly acclaimed, but money was always tight, forcing Carradine to fund these productions out of pocket. When the Shakespeare Players collapsed (which also caused his first marriage to dissolve), Carradine found himself in dire financial straits, forcing him to continue appearing in roles beneath his talent.

Tropes associated with his body of work include: