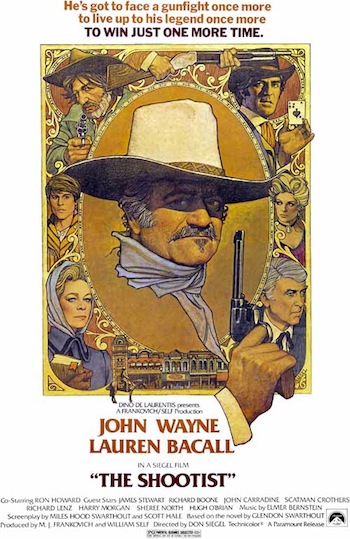 The Shootist is a 1976 Western film directed by Don Siegel and starring John Wayne in the title role.

J.B. Books, a famous gunfighter of The Wild West, has traveled to Carson City, Nevada to see an old doctor friend (James Stewart) about some health troubles. Said doctor tells him straight: it's cancer, and Books has only weeks to live. Told to rest in town, he makes his way to a boarding house run by widow Bond Rogers (Lauren Bacall) and rents out a room there under a false name. The widow's son Gillom (Ron Howard) quickly finds out Books's real identity and word quickly spreads that the gunfighter is in town. Soon enough, Books's old enemies come looking to settle scores and a local gambler seeks to make a name for himself as the Man Who Shot John Wayne— er, J.B. Books...

The film was made at a time when two things were coming to an end: The traditional film Western and John Wayne's career. Of course, they could have been considered the same thing; Wayne's age was catching up to him, fewer Westerns were being made, and the ones that were being made messed with the traditional morality of the Westerns made in The Duke's heyday, and which he virtually embodied.

Note: The legend that Wayne was dying from cancer in real life while this was being made is just that, legend; his cancer was in remission at the time. The truth was that while The Shootist was Wayne's planned farewell to Westerns, he had hopes of starring in more films in other genres, such as the detective roles he started taking earlier in the decade. It was just that he suffered other illnesses that prevented him from making more movies, and it wasn't until three years later that the cancer came back and made The Duke ride off into the sunset for the final time.