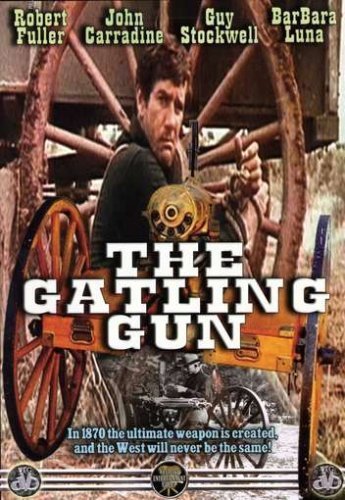 The Gatling Gun is a Western shot in 1969 in New Mexico. The final film of director Robert Gordon, it was not released until 1971. It stars Robert Fuller, Guy Stockwell, Woody Strode, Patrick Wayne, Pat Buttram, and John Carradine.

Lured by Apache gold, two cavalry troopers desert their post, killing some of their fellow troopers in order to steal a Gatling Gun. The devious two use a pacifist pastor to bring the weapon across the country. A pursuing cavalry patrol kills one of the deserters and captures the other, however the recovered weapon has been made inoperable. The Apaches, under their chief Two Knife, relentlessly attack the patrol in order to get the Gatling Gun, or "King Gun" as they call it, to use against the soldiers.