Literature / The Grapes of Wrath 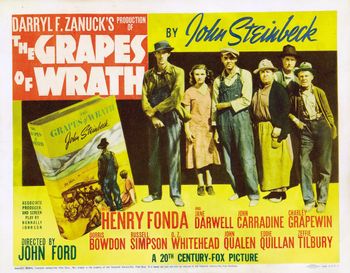 A 1939 novel by John Steinbeck, winner of the 1940 Pulitzer Prize. The book makes a strong political statement (of the social liberal kind), and is pretty much the antithesis of anything by Ayn Rand. The story follows the Joads, a poor family from Oklahoma hit by the dust bowl that travel all the way to California (losing the grandparents along the way) to find jobs on farms. Sadly, they discover that work conditions are horrid and farms are overpopulated and people are paid poorly. The content and themes of The Grapes of Wrath made it very controversial in its day, and it remains divisive more than eight decades after its publication. What isn't denied is that the novel was extremely influential.

Adapted into a film only a year after it was published. It was directed by John Ford and starred Henry Fonda, in what is considered to be among the finest works from both legends. Ford regular John Carradine also appeared in the film, while Jane Darwell earned the Best Supporting Actress Academy Award for her performance as Ma Joad. The movie was considered to be the Great American Film before Citizen Kane was rediscovered in the late '50s. Steinbeck himself considered it an improvement on his book. Also adapted into a play in 1988.

Alternative Title(s): The Grapes Of Wrath