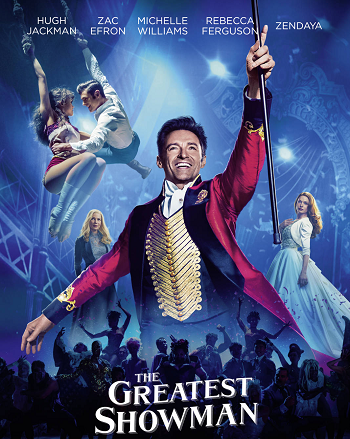 ♫ Look out 'cause here I come
And I'm marching on to the beat I drum
I'm not scared to be seen
I make no apologies, this is me. ♫
Phillip Carlyle: I can't just run off and join the circus.
P.T. Barnum: Why not? You clearly have a flair for show business.
Advertisement:

The Greatest Showman is a musical drama film loosely based on the story of American showman P.T. Barnum, founder of the circus that became the famous travelling Ringling Bros. and Barnum & Bailey Circus.

The ambitious Phineas Taylor Barnum (Jackman) marries his childhood sweetheart Charity (Williams). Together, they have two daughters and live a humble life. After Barnum is laid off from his job, he eventually founds Barnum's Circus, a grandiose exhibition of various "freaks" and outcasts. The show is a hit, but Barnum struggles to balance the family that built the circus with him and his desire to further his own reputation.

♫Ladies and gents, these are the tropes you've waited for:♫

♫ We light it up, we won't come down
And the sun can't stop us now
Watching it come true, it's taking over you
This is the greatest show! ♫
Feedback

The Greatest Showman may have taken a few liberties.

The Greatest Showman may have taken a few liberties.