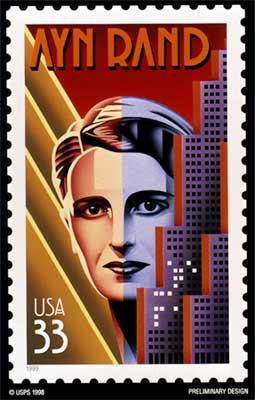 Ayn Rand born on February 2, (January 20 in the Julian calendar) 1905 and died on March 6, 1982) was a popular yet controversial writer from the latter half of the 20th century, and the creator of Objectivism, a self-proclaimed philosophy which she expressed in her fiction — especially The Fountainhead and Atlas Shrugged. She also wrote the screenplay for the film of The Fountainhead, but wasn't too happy with the final film (citing production design and other issues but mostly resenting the collaborative nature of film-making altogether).

Born Alisa Zinov'yevna Rosenbaum to middle-class Jewish parents in St Petersburg, she seems to have been a rather lonely child who justified her social isolation by claiming a unique(ly alienating) intellectual superiority over her peers. She studied undergraduate history for free at Petrograd State University, graduated in 1923, went on to study at the State Technicum for Screen Arts, and came up with the name "Ayn Rand". In 1925 she secured an exit Visa for the purposes of visiting her American relatives in 1926, which she seems to have significantly overstayed while applying for American citizenship.

She played a nameless extra with the 1927 film The King of Kings, where she met her husband Frank O'Connor, whom she remained married to until his death in 1979.

While living with her relatives, she worked on creating a philosophy which justified her loneliness and absolved her of the expectations placed upon her by the investment that her family and the Soviet state had made in her: Objectivism, a worldview which championed absolute selfishness (a term she used to mean the ethical and intellectual betterment of one's self) as the definition of moral goodness. Her early works of philosophical fiction included We the Living (1936) and Anthem (1938), but The Fountainhead (1943) was her first success (given word of mouth in Classical Liberal circles). The success of The Fountainhead led to her penning of Atlas Shrugged (1957), a novel indisputably capable of stopping doorsnote A famous apocryphal quote has Dorothy Parker reviewing the book and noting, "This is not a novel to be set aside lightly. It should be hurled with great force." and leading to the creation of the Ayn Rand Society (which still exists).

The 1960s saw a revival of interest in Classical Economics. So-called Neoclassical economics asserted that in theory, structuring the economy to maximise the profits of the upper classes was the best way to create a democratic meritocracy. So-called Austrian economics asserted that an unregulated economy was the only moral alternative to a Communist-style Command-Economy. Whether or not the political economy that resulted was meritocratic, Austrian economics maintained that all alternatives were immoral because of their 'violation' of individual rights beyond what was strictly necessary for a society to exist at all (through taxation, law and order, etc). Ayn Rand's philosophy of Objectivism is best understood as a complement to the Austrian school championed by her contemporary Ludwig von Mises, but with a greater socio-political focus.

Objectivism is distinguished not just by its rejection of collective identity including family, gender, race, community, socialism, and communism (but not nationalism, as she came to love the USA as "the only moral country in the history of the world", although this only applied to America; Rand considered the film "A Song to Remember" collectivist propaganda because it has Frédéric Chopin sacrifice himself for a patriotic cause) but by its rejection of Auguste Comte's definition of 'altruism' (sacrifice of an individual to benefit other individuals).note It is worth noting that Heroic Sacrifices are by no means discouraged in this system; only in Objectivist terminology they would not be called sacrifices, since they involve giving one's life or comfort for something one values more, which is selfish by Ayn Rand's definition. She rejected virtually all historical philosophers save Aristotle and virtually all her contemporaries except Ludwig von Mises, and expressed disdain even for the political movements which embraced her ideas - such as the USA's Libertarian Party, or as she called them, "hippies of the right". (Ayn Rand did, however, admire one contemporary, considering William Hickman "a brilliant, unusual, exceptional boy", a man responsible for "the most horrible crime of the 1920s", the death of a girl named Marion Parker

in 1927 and speculates about the society that turned him into "a purposeless monster.")

Ayn Rand and Objectivism are both very polarizing subjects on the internet and elsewhere. Backdraft often results from mentions of her work, largely because of her philosophy but also because of the poor quality of the prose demonstrated in "Atlas Shrugged" and elsewhere. Ironically, among academic philosophers her work is one of the few subjects that isn't particularly polarizing - nearly everyone hates it. When the first academic book about Rand's philosophy appeared in 1971, its author declared writing about Rand "a treacherous undertaking" that could lead to "guilt by association" merely for taking her seriously. Even philosophers like Robert Nozick who agree with most of her conclusions think her arguments for them are incoherent.

Regardless, the socio-economic and political implications of her philosophy mean that it has continued to receive heavy funding and promotion. Think-tanks founded by Objectivism's proponents, such as the Ayn Rand Institute

and The Atlas Society

, have promoted Objectivist ideas for many decades, and lobbyists have successfully put her books on the political philosophy courses in several colleges in the USA. That said, Objectivism is not entirely an "Astroturf" ('fake grassroots') movement. There was a genuine upswing of popular interest in Rand and other Neoliberal and Austrian philosophers such as Hayek, Friedman, and von Mises in the period between the Savings and Loan Bust of 1986-1995 and the Great Recession of 2008, and particularly between 1995 and the popping of the dotcom bubble in 2001.

Unfortunately, Rand as a figure generates intense feelings of either seething hatred or (some

) cultish adoration and as such debates over the content of her ideas have a general tendency to spill over into debates about her as a person. For instance, several Rand critics question her ability to stay true to her own principles

. She may have also received government aid

after getting lung cancer, but Rand herself argued that if someone had paid taxes to fund these systems then they "have a clear right to any refund of their own money" (see here

). In fact, she managed to spin it that paradoxically (and conveniently) it is the very people who object to government aid who have the right to have it.note The argument being that those who oppose welfare are having their money taken from them by force, entitling them to "their money back." Whereas those who support such social programs are contributing willingly in the hope of some return, ipso facto rendering them "parasites" and unworthy of help. These aspects of Rand's character have even been criticized by several Objectivists. While Rand's personal eccentricities do not necessarily prove anything about the validity or invalidity of her philosophy, Rand did once

point to herself as proof that her philosophy could work in the real world.

Some Americans found her writings especially evocative in the economic climate circa early 2009. Her sales are on the rise and commentators have noted it. Mind you, the sales of Karl Marx's works are also on the rise. There could be other reasons as well. Her pen name is allegedly a contraction of her birth name: "Рзнбаум" (Cyrillic for Rznbaum) resembles "Randayn" when handwritten. Her name is pronounced like the German 'Ein' - rhymes with "mine", though some online detractors use the mnemonic "Ein Reich, Ein Volk, Ayn Rand". Annoying Objectivists by consistently, repeatedly pronouncing it as if it were merely a creative spelling of "Ann" can also be fun.

Unfortunately, given the polarizing nature of Rand's work, this page can be caught up in an Edit War from time to time. To make it clear, this page is NOT about what your evaluation of Rand, her works or her ideas is. Any contributions should observe the Rule of Cautious Editing Judgement.

Though her works have their own pages, it might be worthwhile to note here Ayn Rand's relationship to the Strawman Political trope. Indeed, her villains are very much Strawman Politicals. For example, in Atlas Shrugged, they simply want to feed off of the talent of the gifted. Ayn Rand's personal diaries note that each protagonist is planned to show either why they will succeed because of their adherence to Objectivist principles, or why they will fail because of their non-adherence, or doubt, or acceptance of anti-Objectivist principles such as Comtean altruism. These notes also compare each character to the Ultimate Objectivist Messiah, John Galt. So in essence, even her protagonists can be considered Strawman Politicals.

The above is especially true for Rand's later writing. Comparison of her three novels could indicate a clear deterioration in the quality of characters representing the opposite ideology. Her first novel We, The Living is very harsh on Communism as an ideology and on the Soviet Union as a regime, but it has a major character, Andrei Taganov, who is a Communist, senior member of the Party, and who is very much a Good Guy: heroic, idealistic, generous, in fact a Knight In Shining Armour and his lady's bodyguard - he is deeply in love with the book's female protagonist who returns his love quite a bit and is always torn between him and the other man in her life who is anti-Communist (and Rand admitted in the forward to the book that this character to a considerable degree represents herself!). In her second book, The Fountainhead, the character who represents Roosevelt's New Deal, Ellsworth Toohey, is an unquestioned Bad Guy, a Man You Love to Hate - but he is a brilliant Chess Master, always spinning webs of very clever and complicated Conspiracy, in short a Worthy Opponent with whom the female protagonist has (at least in the early parts of the book) a complicated Love-Hate Relationship. There is also Peter Keating, who's basically a sympathetic Anti-Villain with an equally complicated relationship with the main hero, Howard Roark. In Atlas Shrugged - which Rand herself considered her best, but not everybody agrees - most characters representing the opposing political and social point of view are miserable, disgusting nothings, who never do or say a single thing deserving of the reader's appreciation. (There are exceptions: Dr. Robert Stadler is genuinely brilliant and initially has better impulses—-in their first discussion Dagny Taggart looks at him with admiration at one point; his self-betrayal is shown as a tragedy. Fred Kinnan is bluntly honest, to the discomfort of the other villains, and admires John Galt after meeting him face to face.)

Works of Ayn Rand on the wiki:

The works of Ayn Rand provide examples of:

Works and Creators influenced by Rand: