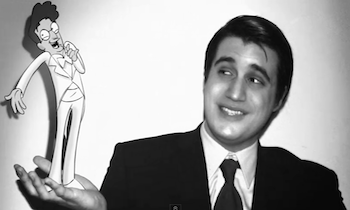 Idunno, should we tell blissfuly unsuspecting Chuck what good ol' Harry's got in store for him?

Harold Andrew "Harry" Partridge (aka HappyHarry, born 17 August 1985) is an English flash animator, who voice acts, writes and scores all of his animations, as well as occasionally doing collaborative works with Chris "Oney" O'Neill (of Leo and Satan fame) and Stuart Ashen. He also happens to be the son of XTC's Andy Partridge. Your stereotypical Flash cartoon, his are not!

pages. Some of his older videos were once available on That Guy with the Glasses, but they have since been removed.

Not to be confused with Harry Potter

The works of Harry Partridge provide examples of :