Comic Book / Give Me Liberty 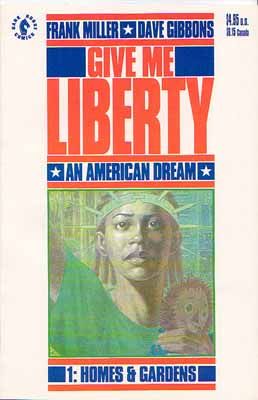 Give Me Liberty is a four-issue Comic Book miniseries that makes up the first volume of the Martha Washington series by Frank Miller and Dave Gibbons, originally published in 1990-1991. The series as a whole describes the life of Martha Washington, an impoverished black girl born into one of the worst ghettos of Chicago in a dystopian near-future, with the United States on the verge of civil war. Despite her lack of opportunities and the machinations of others out to destroy her, Martha eventually becomes a war hero and a major figure in deciding the fate of the United States.

Give Me Liberty was followed by two more miniseries and several one-shots, which comprise a comprehensive Story Arc of Martha's life and death:

The title of the series comes from the Patrick Henry quotation, "I know not what course others may take but — as for me — give me liberty or give me death."

Give Me Liberty provides examples of: