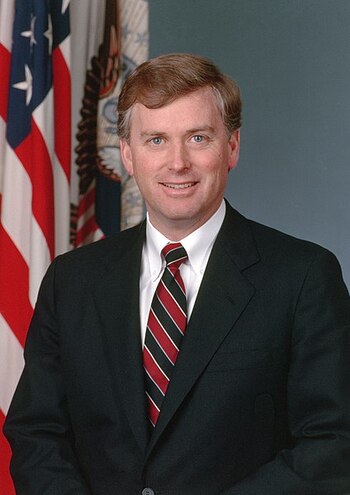 "I believe we are on an irreversible trend towards more freedom and democracy, but that could change."
"In Ayn Rand's wonderful book Atlas Shrugged, the main question throughout the book is 'Who is John Galt?' The question everyone now is asking is, 'Who is Dan Quayle?'"
— Reporter in a newspaper article for the New Orleans Times Picayune
Advertisement:

James Danforth "Dan" Quayle (born February 4, 1947) is an American politician who was the otherwise forgettable vice president under the George H. W. Bush. He was a little-known senator from Indiana before Bush Sr. tapped him as his running mate in 1988, and he became a non-entity catapulted into the spotlight. He promptly used that spotlight to make several malapropisms and misinformed remarks, giving him a reputation for verbal gaffes that he could never shake. The most common caricature of him is as a political Ralph Wiggum.

Quayle soon became the butt of many jokes on the comedy circuit in the late 1980s and early 1990s. It led to a few "new" quotes being mistakenly thought to have been said by the real Quaylefor example "I was recently on a tour of Latin America, and the only regret I have is that I didn't study Latin harder in school so I could converse with those people.". Even his fellow politicians got in on the act, with one of the meanest coming from then-Senator John Kerry: if Bush is shot, the Secret Service has orders to shoot Quayle.note It's not a particularly new joke; it goes back as far as Richard Nixon's first Vice President Spiro Agnew (suggesting that his resignation before the Watergate scandal, leaving Gerald Ford as VP when Nixon resigned, was a major bullet dodged). They also said this about George W. Bush's VP Dick Cheney, but more on the basis that he would be a President Evil. He would later become the main comparable when future Vice Presidential candidates turned up with a sparse resume and a tendency for gaffes, most notably John McCain's 2008 running mate Sarah Palin. (Palin was such a prolific malaproper that conservative pundit David Frum thought such a comparison was unfair to Quayle.)

Quayle more or less disappeared from the public eye after Bush Sr. lost reelection in 1992. He declined to run for president in 1996 because of illness, and while he briefly sought the Republican nomination in 2000, he soon withdrew. But he turned up unexpectedly in 2021, when it was revealed that outgoing Vice President Mike Pence (also from Indiana) had asked his predecessor Quayle whether the VP had the power to refuse to certify the 2020 election results (as Donald Trump insisted he did), and Quayle told him no — in no uncertain terms. Given that this helped avoid a constitutional crisis, pundits started questioning whether they had to thank this man for saving American democracy.

The following tropes are associated with Dan Quayle in portrayals of him in media: