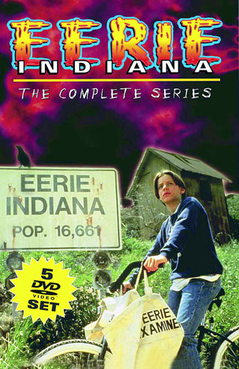 Eerie, Indiana was a nineteen-episode supernatural series that aired on NBC from 1991-92 (in prime time). It ran again on Fox Kids Saturday mornings from 1997-98 as part of their "No Yell Motel" block, which included a lot of scary kids' shows (the live-action adaptation of Goosebumps, reruns of the Australian kids' show Round the Twist, and Steven Spielberg's first animated project from DreamWorks Studios, Toonsylvania). The short-lived series had a mid-season Retool and had an unproduced episode called "The Jolly Rogers". It also spawned a second series, Eerie, Indiana: The Other Dimension, one year after Fox Kids ran out of NBC episodes to show, as well as a series of spin-off novels. The series could be described as Twin Peaks meets The Twilight Zone told from the POV of a snarky 13-year-old version of Fox Mulder.

Marshall Teller, a transplant from New Jersey whose family has recently moved to the desolate town of Eerie, and Simon Holmes, an Eerie native, investigate the weirdness that inhabited the titular town. It would be easier for them if the town's residents didn't refuse to see themselves as anything but normal. Some of the more bizarre confrontations include such urban legends like Bigfoot and a still living Elvis Presley.

In 1997, following the series' rebirth on Fox, Eerie was continued as a short-lived series of books that continued the story, allegedly just one year after the end of the original series. The books were met with mixed reviews and after just 17 entries, the series was cancelled in 1998.

As of August 2018, the series is available to stream on Amazon Prime Video, and one disc collection on DVD is available through Netflix's DVD arm.

Compare Round the Twist, an Australian show with a similar premise, only with more ghosts, gross-out humor, and which is more light-hearted.