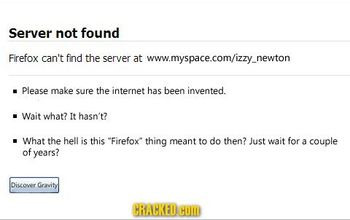 Hm. It's probably down for maintenance...
Advertisement:

You travel back in time to The Middle Ages or 1 Million B.C., turn on your Time Machine's computer and... there's Google! Apparently the Web has always been there... humans just discovered how to access it in the early 1990s. This phenomenon results from filmmakers wanting to have their time-traveler show off the World Wide Boomstick without letting logic get in the way. However, anyone with a passing understanding of technology will realize that this implies the Web was always floating out there and that people just needed the right equipment to access it. (Which, we grant you, is a pretty nifty idea for a story gimmick, but this trope more often occurs because the writers just weren't paying attention.)

Another variation occurs if a time-traveler brings a TV or radio back in time and it plays current shows rather than the ones that existed back then. In fact, this trope refers to pretty much any instance where a technology that clearly relies on outside input to function is placed in a situation, usually through Time Travel, where that input could not possibly exist and it functions anyway.

This could technically happen in real life, assuming time travel is possible. However, it would require the machine's owner to not clear its history and all the files downloaded from the website in question. The computer obviously would not be able to get to anywhere on the Internet it had not stored. And of course it would require a source of electricity, if you go back far enough. Alternately, if communications between the two times are available, you could theoretically route the Internet through such a link - the computer in the past would call a computer in the present and ask for the page, and the computer in the present would deliver it back. The lag would probably suck, though.

But with the advent of really big hard drive spaces (A few terabytes would be sufficient to get a good portion of The Other Wiki, for starters), one could conceivably download big, giant portions of the internet that is relevant and bring it back through time for later access. Of course, you must be pretty darn Crazy-Prepared if you actually do this in the first place.

(Of course, the Doctor could make a cell phone call through time, so theoretically...)