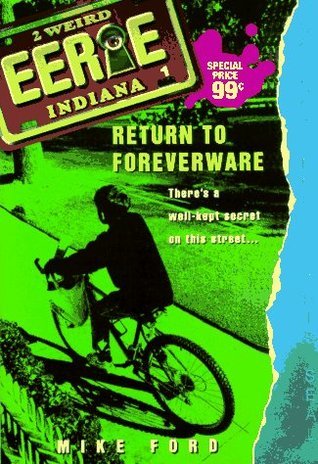 What lies beneath?
Advertisement:

In 1997, Eerie, Indiana the Book Series, was a short-lived continuation of the original supernatural series of the same name that aired on NBC over half a decade before it. It was a Children's Literature series released on a monthly basis with each entry clocking in at around 120 pages, similar to the ever-popular Goosebumps. The series followed the new adventures of Marshall Teller and Simon Holmes for the first 12 entries, detailing the exploits of Marshall, a transplant from New Jersey whose family has moved to the small town of Eerie, and Simon, an Eerie native, as they investigate the weirdness that inhabits this town. As the other residents are oblivious to the supernatural nature of the town to the point of denial, Marshall and Simon are left to their own devices to uncover the truth behind both the individual happenings around Eerie, and the secret behind it all. They deal with everything from escaped wild west criminals from cryogenic storage to Bigfoot eating out of the trash.

Then, as of Book 13, Switching Channels, Mitchell Taylor and Stanley Hope of Eerie, Indiana: The Other Dimension fame took over as the main characters following both a dimensional and perspective shift. This lasted a further seven books before getting canned in the final entry, We Wish You an Eerie Christmas.

Allegedly, these books is set a mere one year after the end of the original series, which should make the present year 1993. However, the authors opted to make it the present year of the time, 1997. This isn't the last time they'd play fast and loose with the continuity of the TV show. Authors Mike Ford, John Peel, Jeremy Roberts, Sherry Shahan, and Robert James decided to make the series their own and tell their own overarching story, instead of continuing down the rabbit hole set by the original's creators.

There were 17 books in total over the course of the series' run: