This page is in the process of being split. You can help! 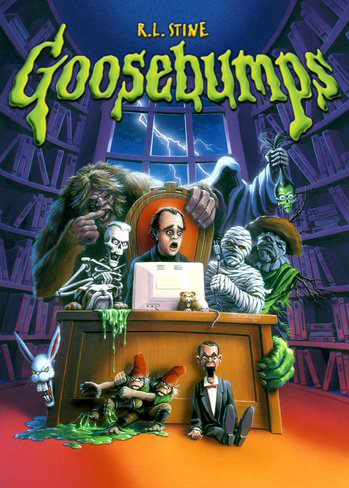 It was through this simple idea that one of the most successful and controversial pre-Harry Potter-era book series began.

The original Goosebumps series lasted for all of 62 books, including such famous titles as The Haunted Mask (which was also the first episode of the TV adaptation, shown as an hour-long special episode), Welcome to Camp Nightmare, the Night of the Living Dummy series (there were three in the original series, but the other spin offs and successor series have had at least one story with Slappy as the antagonist), and the Monster Blood series (the fourth and last of which being the final book in the original series).

It was The Twilight Zone for pre-adolescents, with a twist at the end of every book (sometimes cruel, sometimes not, sometimes non-existent, which is a twist in and of itself given the series). Stine cites Tales from the Crypt published by EC Comics as a source of inspiration though the series isn't nearly as gory and violent as the comics.

In the later editions of the series, it became somewhat infamous for the "You Can't Judge a Book by Its Cover" idiom. Deep Trouble, for instance, had a picture of a giant shark going after a boy swimming in the ocean, which is only a minor point — the story was really about a boy finding a mermaid who was being targeted by scientists who wanted to experiment on rare sea life. Egg Monsters from Mars featured the monsters as horrible threats on the cover, but the egg monsters are actually a benevolent force captured by (you guessed it) a Mad Scientist.

Later incarnations of the series included the rather more obscure Goosebumps Series 2000 (a Darker and Edgier Goosebumps series that ran for 25 books), and Gamebook series Give Yourself Goosebumps. Both ended in early 2000, but the series was eventually revived in 2006 with the Goosebumps Graphix series (adapting classic books into comics), and further spinoffs were released in 2008-2012 (the twelve-book Goosebumps HorrorLand series, a crossover between new and existing characters — it also got a video game adaptation, and was continued with a second, seven-book story arc and then the six-book Hall of Horrors mini-series), 2012-2016 (Goosebumps Most Wanted, featuring a mix of classic and new villains in standalone stories) and 2017-ongoing (Goosebumps SlappyWorld, with each book introduced by Slappy the Dummy). There were also spinoff titles compiling various short stories, such as Tales to Give You Goosebumps and Goosebumps Triple Header.

There were also a pair of PC games in the 1990s: Escape from Horrorland, a follow-up to the original One Day at Horrorland, and Attack of the Mutant, which had a different plot than the television episode or book with the same name. A phone game called Goosebumps: HorrorTown premiered in 2017. IDW started publishing a comic series based on the franchise in 2017.

For tropes relating to the Goosebumps television series, look here.

Columbia Pictures released a film based on the series on October 16, 2015, starring Jack Black as R.L. Stine. View the trailer here.

open/close all folders
A
B
C
D
E
F
G
Every ghost in the series has their own mission, be it to find someone who can be their friend in death, or to carry out some unfinished business.
H
I
J
K
L
M
N
O
P
Q
R
S
T
U
V
W
Y
Feedback

Scene from the Goosebumps tv series, thirty sixth episode - Vampire's Breath. Freddy and Cara wind up chased into an underground lair where Nightwing's vampire minion rest. They run into a girl, Gwendolyn, who claims she's a human slave of the vampires and offer help. When Nightwing capture Cara and holds her hostage for his vial of Vampire's Breath. Gwendolyn calls for Freddy to throw him the vial which he does... only for her to reveal her true nature.

Scene from the Goosebumps tv series, thirty sixth episode - Vampire's Breath. Freddy and Cara wind up chased into an underground lair where Nightwing's vampire minion rest. They run into a girl, Gwendolyn, who claims she's a human slave of the vampires and offer help. When Nightwing capture Cara and holds her hostage for his vial of Vampire's Breath. Gwendolyn calls for Freddy to throw him the vial which he does... only for her to reveal her true nature.