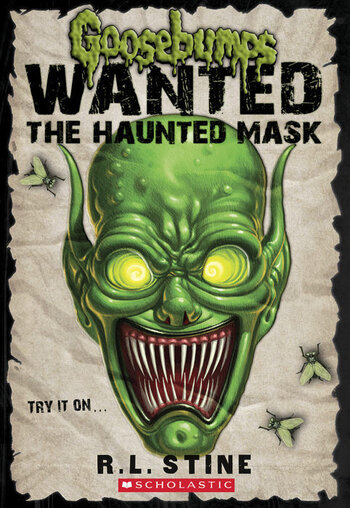 The Goosebumps book where the Haunted Mask gets a new origin story, and one kid has to deal with it while another encounters an evil spirit.
Advertisement:

Lu-Ann and her friend Devin love Halloween. However, it's going to be ruined for both of them this year. Lu-Ann has to attend a party held by a classmate named Polly whom she dislikes and Devin has to spend the week on a pumpkin farm his parents recently bought. Come Halloween, things get more spiced up than they expected. Lu-Ann finds a familiar creepy mask while Devin suspects something is going on with the vines on the farm. Can they escape the horrors they are both about to face?

It was the first Goosebumps book to have its first release be in hardcover, and serves as a prelude to the Goosebumps: Most Wanted series.