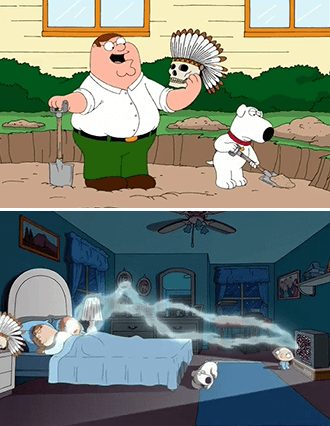 The USA is having so many disasters and tragedies you'd almost think it was built on thousands of ancient Indian burial grounds.
— @shutupmikeginn

A common explanation for supernatural goings-on in America, most commonly seen in movies coming in two common varieties: A Haunted House is built on an ancient Indian burial ground. The disturbed spirits of the ancients of the land then enact their bloody vengeance against those who wake them by turning off the lights, making hooting noises, creating flies and maybe, if they feel up to it despite being dead, killing people. Sometimes this isn't known or revealed until the end, sometimes it's known only to the greedy land developer who just doesn't care as long as he gets it cheap, or to people who don't believe in such nonsense but will by the end of the movie.

The other slightly less common version has the spirits of the dead not bothered by new construction (after all, people have to live somewhere). At least they weren't until someone dug up something they owned or disturbed their remains. At that point whoever did it or whoever was in the vicinity of it is cursed. Generally whatever horrible thing happens to the fool who did it will continue, following them from place to place no matter how far from the original burial ground they go, until they put whatever they took back or give the remains a proper burial. That activates the Curse Escape Clause and the dead go back to eternal resting until someone else decides to mess with them.

The reasons for the ancient Indian burial ground are plenty. Burial sites are often connected with Ancient Elder Evil, and, in the USA, unless your definition of "ancient" is pretty flexible, that means Native Americans. Some tribes didn't give their burial grounds signs that they were graveyards, such as tombstones, memorials or rolling clouds of Ominous Fog. Native Americans are stereotypically assumed to be more magical, and hence will have niftier ghosts. The plotline can play off the concept of The Savage Indian of The Western, or be used as a message about the Compassionate Native Who Got the Shaft from Settlers and then got an affordable three-bedroom home dumped on top of him by the evil real estate developer.

This is mostly a Dead Horse Trope these days. If it gets used, it's often at least slightly tongue-in-cheek, humorous, lampshaded or subverted. In any plot with something weird happening, a Genre Savvy character may make the Obligatory Joke that it's due to an ancient Indian burial ground, even outside the Americas. On a more serious note, much like how Campbell Country is the non-American counterpart to Lovecraft Country, this trope can also be extrapolated to tombs and ruins from ancient cultures more appropriate in a given non-American setting. For example, stories set in Britain may use Celtic, Roman, Saxon, or Norse ruins to similar effect.

Truth in Television to a point: from time to time a real estate developer in America will actually be chagrined to discover that their brand new subdivision was at one time the cemetery of a local tribe or a forgotten frontier settlement. It's also worth noting that in decades past less scrupulous developers occasionally quietly disposed of such remains in the nearest empty hole, and even the more respectful tended to gather the remains and inter them en-mass in the local public cemetary with little to no effort made to identify them. This trope, however, seems be a case of a Space Whale Aesop resulting in positive real world changes: These days the discovery of such sites by developers not wishing to Tempt Fate note or at least not wishing to lose potential home buyers who don't feel like putting their own skepticism to the test... usually results in very public demonstrations of utmost respect, proper archeological investigations, and dignified relocation or reinterring of the remains

Sub-Trope of Due to the Dead and Holy Ground (although, once disturbed, it can easily turn into Unholy Ground). Note that in many cultures, disturbing graves or other places related to the dead is regarded as dangerous.

Note that this trope refers to Native Americans, not people of the country (or subcontinent) of India. The majority of the people of India are Hindu, and hence usually get cremated instead. This wiki does not, however, recommend desecrating burial grounds in India purely on the basis of this loophole.

A European variant of the trope:
This intro to the series gives a glimpse into the rather unsavoury, haunted history of the foundation that Copenhagen's Kingdom Hospital was built on.

A European variant of the trope:
This intro to the series gives a glimpse into the rather unsavoury, haunted history of the foundation that Copenhagen's Kingdom Hospital was built on.