Willow: If we could just talk to him—
Spike: You exterminated his race. What could you possibly say that would make him feel better? 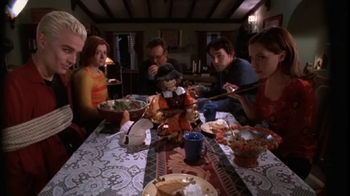 Buffy tracks and kills a vampire while Angel watches her from behind some bushes. The college has a groundbreaking ceremony for the new Cultural Center building, and Xander is one of the construction workers. Buffy, Willow, and Anya watch, and while Anya imagines sex with Xander, Buffy and Willow talk about the meaning of Thanksgiving. Xander begins to dig, the ground suddenly caves out under him and he drops into an old abandoned building, which turns out to be the Old Sunnydale Mission. Buffy is upset that her mother is going to be out of town for Thanksgiving, but then decides to cook her own Thanksgiving dinner and invite all their friends. Covered in a blanket and in terrible shape, Spike runs through the woods, trying to escape Riley and his team as they look for him. Anya arrives at Xander's to find him incredibly sick, and right away starts taking care of him. A green haze comes up from the old Mission and goes to the Cultural Center where some weapons are being kept. After the haze comes in contact with a spear, it turns into a large Native American man and kills Professor Gerhardt. Buffy and Willow later secretly investigate the murder, and wonder why the curator's body was missing an ear. They discover that a Chumash knife is missing. Buffy tells Giles about the murder while planning to have Thanksgiving at his place.

After Giles agrees to look up information on the Chumash Indians, and Buffy leaves, Angel appears from the back room, having travelled to Sunnydale due to his friend's vision of Buffy in danger. He and Giles talk about watching over Buffy. Angel tells him he doesn't want Buffy to know, though keeping a secret from Buffy is hard for both of them. Buffy and Willow talk about preparations for Thanksgiving and then Riley shows up. Buffy invites Riley to her Thanksgiving dinner, but he already has plans to visit family in Iowa. Willow goes to get coffee and runs into Angel. He tells her he's not evil, and that he's just looking out for Buffy because she might be in trouble. He quickly explains he's not here for personal reasons and only to keep Buffy safe, though contradicts that sentence when he asks who's that guy talking to Buffy, seemingly showing suspicion and slight jealousy.

Starving, Spike tries to get food from Harmony, but she threatens him with a stake and he leaves. Buffy goes to find Father Gabriel, a priest who may have information for them, but finds that a returning Chumash spirit has killed him. After the mission was uncovered, his spirit was released to reenact the wrongs that were done to his people. Buffy and Giles talk about it, while working on dinner and then Willow shows up with a stack of books on the Chumash. She explains that while they once were peaceful, the people of Sunnydale horribly mistreated them. Cutting off a victim's ear is a way to prove that the kill was successful. Willow and Giles argue about what happened between the Native Americans and the people who took their land and their lives. When Buffy goes to the kitchen, the two talk secretly about Angel's reappearance.

Anya practically carries Xander to Giles's place, and after some research, they determine that he probably has malaria, smallpox, and syphilis — some of the diseases that took a terrible toll when brought from Europe to a population without resistance.

With only a blanket to protect him from the sun, Spike shows up at Giles's place asking for help. Buffy is reluctant to give it, but after he offers inside information on the Initiative, and Willow helps him explain that he can't bite anyone anymore, they bring him inside and tie him to a chair.Everyone begins to argue about what they're going to do to stop the spirit. Willow doesn't want to kill him, but everyone else argues that that's the only way. While Willow, Anya and a weakened Xander go to find the Dean and warn him his life may be in danger, the spirit calls forth more spirits to help him get revenge for their people.

The spirits attack Buffy, Giles and Spike with arrows. Helplessly tied to a chair, all Spike can do is try to move out of the way as he gets hit with arrows. Willow, Xander and Anya encounter Angel on their way back and they determine that the Chumash went after Buffy. Buffy tries to go for more weapons, but gets an arrow in the arm. After riding over on bicycles, the Scooby Gang tries to attack the Chumash spirits as best they can with shovels. Angel shows up and helps them out. Buffy cuts one of the Chumash with his own knife and discovers that their own weapons can kill them. The spirit turns into a large black bear, which Spike desperately tries to get away from and ends up knocking the chair over. Buffy struggles with the bear and then stabs it. All the spirits disappear.

Angel walks away without being seen by Buffy, and later, the gang sits down to Thanksgiving dinner. Still tied to a chair, Spike sits with them and whines that he still hasn't been fed. Xander accidentally lets it slip that Angel was in town.