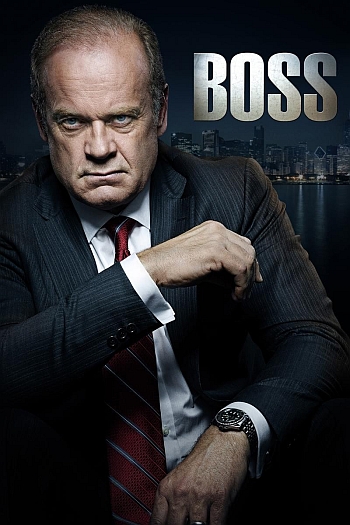 "Every person who has plotted against me will feel the force of my wrath. No one will be left unscathed."
— Mayor Tom Kane
Advertisement:

Boss is an American drama series starring Kelsey Grammer that aired on Starz from 2011 to 2012.

The series begins when Chicago Mayor Tom Kane (Kelsey Grammer) is diagnosed with Lewy Body dementia, a degenerative neurological disease that will eventually kill him. Unwilling to step down from his throne, Kane decides to hide his condition from everyone around him, including his own family. It won't take too long for others to notice that something is wrong: however his closest assistants, Kitty O'Neil and Ezra Stone, are too afraid of him to ask, and his wife Meredith simply doesn't care. As if this wasn't enough, Kane also has trouble trying to reconcile with ex-addict daughter Emma, and to keep Chicago Sentinel reporter Sam Miller from digging too deep into the dirt...

Eventually the allegiances shift and the political game turns into a fight to the death when everyone else tries to remove Kane from control - and prevent him taking the city down with him.

On November 20, 2012, Starz announced the cancellation of the show. It ran for total of 2 Seasons (18 episodes). Against some very fierce competition, Kelsey Grammer took home the 2011 Golden Globe for Best Actor in a Drama Series.