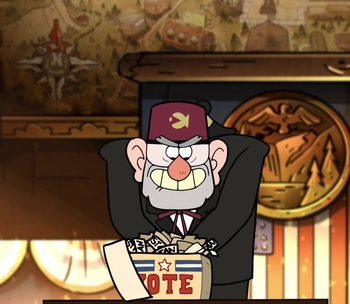 Leo: You know O'Doul and the Mayor, right?
Tom: I ought to, I voted for him six times last November.
Mayor: And that's not even the record.
— Miller's Crossing
Advertisement:

Of course, some degree of this happens for every election in a large enough city or state. The question is whether it's widespread enough to truly influence the results of the election. Still, expect the losing side to cry foul play even in relatively clean elections. This trope occurs frequently as an example of Dick Dastardly Stops to Cheat, when the winning side does it even when they would have won anyway. One variety involves "ghost voting," which is where people stuff the ballot box with the names of people who had in fact died sometime before the election, usually those who were recently deceased. This variant in particular is often associated with the city of Chicago, leading to jokes about Chicago being a place where people come back from the grave to vote.

This should not be confused with a Military Coup, which is where the military of a country or some elements of it attempt to remove the current leader by force.