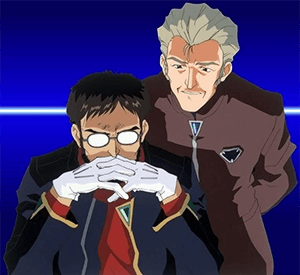 "Hey Fuyutsuki, how does this look?"
"Very... scheming."
"Good. Carry on."
Walter White: I don't understand. What exactly are you offering to do for me?
Saul Goodman: What did Tom Hagen do for Vito Corleone?
— Breaking Bad
Advertisement:

A Number Two who is the Number One's voice of reason. Their advice is valuable to the boss because they're usually right, which puts them in a unique position to "Speak Truth To Power" when other staff might be scared to contradict the boss. This kind of job security is largely self-reinforcing — the boss won't fire him because he needs his uniquely honest advice, but he only has the freedom to be honest because he knows the boss won't fire him. Often the smartest guy in the room, or just a calming influence to a Hot-Blooded boss. There's a high likelihood of his being a retained lawyer.

Similar to The Mentor, but usually the same age or younger than their charge. Possibly, but not necessarily, the Only Sane Man. Might be the Chessmaster Sidekick if it turns out that he's actually the one in charge, or the Hypercompetent Sidekick if their boss would be useless without them. If he uses Obfuscating Stupidity to get away with Brutal Honesty, he's using Mirth to Power (and might be a Court Jester himself). Contrast with Evil Chancellor; compare and contrast The Good Chancellor.

Sometimes, he'd make a better ruler than the real one, but he doesn't want to be in charge for some reason. His boss may even recognise this, which could be a source of jealousy or mistrust.

This position isn't only reserved for employees. It's not unusual for the wife of a powerful ruler or businessman to take on this role, particularly if she is a Proper Lady or Yamato Nadeshiko. They will have the Silk Hiding Steel necessary to point out problems without undermining him. This might overlap with the Lady Macbeth, if her husband is of a less-than-scrupulous character.

Named for the Mafia position made famous by Tom Hagen in The Godfather (so any self-respecting Don will keep one on staff as a matter of principle).

In case you were wondering—con-sill-YEH-reh. Sort of. It's Italian for "counsellor" or "advisor".

The Higher Self is the voice of reason as a character facet, while this trope is that as an external character.