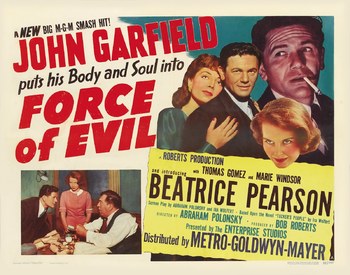 "I didn't have enough strength to resist corruption, but I was strong enough to fight for a piece of it."
Advertisement:

Force of Evil is a 1948 film directed by Abraham Polonsky, starring John Garfield.

Joe Morse (Garfield) is a lawyer for New York mobsters, specifically hoodlums running a numbers racket (basically, an illegal lottery). He's long since crossed into criminal territory, helping his mobster boss Ben Tucker launder money from the numbers. Tucker wishes to consolidate control of all the very lucrative small numbers rackets in the city, and deputizes Joe to carry it out. The situation becomes more complicated for Joe when he finds out that one of those numbers rackets is run by his older brother, Leo.

Both Polonsky and Garfield would fall victim to The Hollywood Blacklist. Polonsky wouldn't get to direct another film until 1969, although he got screenwriting work under pseudonyms. Garfield was still being hounded by HUAC when he suddenly died of a heart attack in 1952 at the age of 39.